June 16, 2019- Last week I attended the annual meeting of the board of directors for the Summit, Portage and Medina Counties Chapter of the American Red Cross. But it was more than

just the final meeting before the summer break. Amidst the business of thanking outgoing board members like me and recognizing new board members to take the place of those exiting, it was time to thank the volunteers—without whom the Red Cross could not accomplish its mission.

I am always moved—amazed but never surprised—to hear the stories of the heroes that make up the many volunteers who are the first responders. Those who show up and stand alongside to help people who have truly experienced the worst day of their life.

The volunteers who have:

The thing that hit me most, however, after I received my certificate of appreciation for nine years of board service, was how little I felt I had done compared to these heroic volunteers. And how inspired I feel to continue on, if not as a board member, as a volunteer for this incredible organization so that I can help to continue its legacy of service. I can’t help but feel especially inspired to “be like Pam.”

Pam Williams received the H. Peter Burg award last year for her lifetime of service to our community and the Red Cross. She also steps down as board chair, passing the gavel to Alan Papa, president and chief operating officer for Cleveland Clinic Akron General. Pam truly is a dedicated volunteer. This small space cannot list her many acts of selflessness:  from sleeping in shelters alongside victims of disasters, to driving a forklift, to serving as our government liaison before and while she was our board chair.

Last week may have been the end of my three-term, nine-year stint as a member of the Red Cross board of directors. But it was the first day of my continuation of a commitment to be a better volunteer for this amazing organization so that I can not only be more like Pam but also like the many volunteers who make up the Red Cross family.

Brook Harless, a U. S. Army veteran from Stark County, is now a member of the Ohio Veterans Hall of Fame.

The Red Cross volunteer and board member was inducted, along with 19 other military veterans, as a member of  the Class of 2017 on Thursday, November 9th, just two days before Veterans Day. She is a member of the Board of Directors in the Stark and Muskingum Lakes Chapter, and volunteers as a caseworker for Service to the Armed Forces (SAF).

“The service Brook provides to members of our military and their families is invaluable,” said Jessica Tischler, Regional SAF Director.  “She helps them connect during times of personal and family crisis.”

Also inducted, Richard DeChant, Jr. a veteran of the U. S. Coast Guard and a community partner with the Red Cross, as the Executive Director for the Veterans’ Initiative for Cuyahoga Community College.

According to the Ohio Veterans Hall of Fame guidelines, the Hall of Fame recognizes Ohioans who served in the military and then continued to contribute to their communities, state and nation in an exemplary manner. 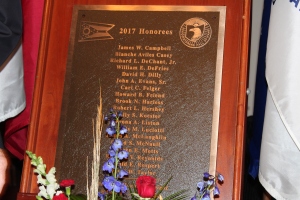 During the inaugural meeting of the merged board, two past leaders were awarded honorary Lifetime Board Memberships.

Steve D. Bullock, who began his career with the American Red Cross in 1962, served as Chief Executive Officer for the Greater Cleveland Chapter from 1982-1999.  He was then selected by Elizabeth Dole to succeed her as acting president of the national American Red Cross.

Mary-Alice Frank started her American Red Cross career in 1979, and was named CEO of the Greater Cleveland Chapter in 1999. She went on to serve as CEO of the Northeast Ohio Region when the national Red Cross merged its chapters into regions in 2011, and held the position until leaving the Red Cross in 2014. She was unable to attend the first combined board meeting due to travel commitments.

In addition to the Honorary Lifetime Memberships,  current board member  Chris Mapes, CEO of Lincoln Electric was presented with the inaugural Corporate Partnership award.

You don’t have to work in finance or law to volunteer with the American Red Cross.  More than 800 residents in Northeast Ohio are Red Cross volunteers, helping their neighbors recover following home fires, guiding donors at blood drives, even taking pictures and shooting video at various Red Cross events.  If you are interested in volunteering, visit our website: redcross.org/neo and click on “Volunteer” on the left side of the screen. You will be dropped directly into the application process. You may also call 216-431-3328 or email, NEOvolunteer@redcross.org.

The next meeting of the combined American Red Cross Board in Northeast Ohio will be held in March, 2016.