Brook Harless, a U. S. Army veteran from Stark County, is now a member of the Ohio Veterans Hall of Fame.

The Red Cross volunteer and board member was inducted, along with 19 other military veterans, as a member of  the Class of 2017 on Thursday, November 9th, just two days before Veterans Day. She is a member of the Board of Directors in the Stark and Muskingum Lakes Chapter, and volunteers as a caseworker for Service to the Armed Forces (SAF).

“The service Brook provides to members of our military and their families is invaluable,” said Jessica Tischler, Regional SAF Director.  “She helps them connect during times of personal and family crisis.” 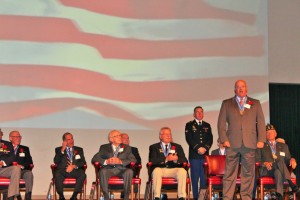 Also inducted, Richard DeChant, Jr. a veteran of the U. S. Coast Guard and a community partner with the Red Cross, as the Executive Director for the Veterans’ Initiative for Cuyahoga Community College.

According to the Ohio Veterans Hall of Fame guidelines, the Hall of Fame recognizes Ohioans who served in the military and then continued to contribute to their communities, state and nation in an exemplary manner.