June 16, 2019- Last week I attended the annual meeting of the board of directors for the Summit, Portage and Medina Counties Chapter of the American Red Cross. But it was more than 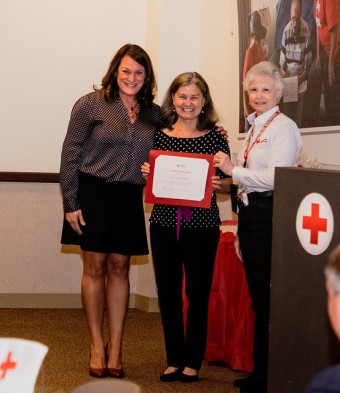 just the final meeting before the summer break. Amidst the business of thanking outgoing board members like me and recognizing new board members to take the place of those exiting, it was time to thank the volunteers—without whom the Red Cross could not accomplish its mission.

I am always moved—amazed but never surprised—to hear the stories of the heroes that make up the many volunteers who are the first responders. Those who show up and stand alongside to help people who have truly experienced the worst day of their life.

The volunteers who have:

The thing that hit me most, however, after I received my certificate of appreciation for nine years of board service, was how little I felt I had done compared to these heroic volunteers. And how inspired I feel to continue on, if not as a board member, as a volunteer for this incredible organization so that I can help to continue its legacy of service. I can’t help but feel especially inspired to “be like Pam.”

Pam Williams received the H. Peter Burg award last year for her lifetime of service to our community and the Red Cross. She also steps down as board chair, passing the gavel to Alan Papa, president and chief operating officer for Cleveland Clinic Akron General. Pam truly is a dedicated volunteer. This small space cannot list her many acts of selflessness:  from sleeping in shelters alongside victims of disasters, to driving a forklift, to serving as our government liaison before and while she was our board chair.

Last week may have been the end of my three-term, nine-year stint as a member of the Red Cross board of directors. But it was the first day of my continuation of a commitment to be a better volunteer for this amazing organization so that I can not only be more like Pam but also like the many volunteers who make up the Red Cross family.