December 19, 2019- Editor’s note: The winner of the 3rd annual Northeast Ohio Region Disaster Cycle Services (DCS) holiday door decorating contest has been announced by John Bernard, the Crossroads Division Disaster State Relationship Director. Like in previous years, we found his comments to be so entertaining that we couldn’t resist including them, along with photos of all 7 doors entered in this year’s competition.

OK, third year in a row. Was hoping for an upward trend. But, I suppose even Santa had tough years – that’s why he hired that bullied kid with the weird nose after all. Anyway, here we go.

Entire door decorated – with wrapping paper and an anorexic Santa straddling a let it snow ornament. Is this a Santa-came-in-like-a-wrecking-ball theme, borrowing from Miley Cyrus? First, that was 2013 and second, no one wants to see a naked Santa. So, thank you for at least putting clothes on him. I would have suggested a more timely approach – maybe Baby Yoda as Santa?

At first glance, meh. BUT, the Santa head is really nice. Very primitive – which is an “in” thing as far as decorating, as my wife tells me.  It’s not a chinoiserie Santa, but it’s still hot! Thank God it’s not “simple,” “clean” and made from “shiplap.” The long reign of terror under Joanna Gaines has come to an end!

Did we NOT cover this a year ago?  We do NOT do fires. Especially ones with so much inflammable….wait a second, flammable….wait, let me get my thesaurus……..WHAT?  They mean the same thing. Well, regardless, so much stuff above it that can catch on fire! Yeah, that snowman would have melted. Holy Santa, look at the size of that one elf in that photo! He’s like 8 feet tall! Must be related to Buddy from the movie.

Tim O’Toole added the following comments on the door: I think the incorporation of the Pedro theme was very well thought out, however, Pedro lacking both thumbs and fingers, it is unclear how he would have typed the associated message.  So obviously some foul play here.

Going for the heartstrings approach, huh?  Might as well have put baby Yoda up there again.  Wait, you don’t know about Baby Yoda?  Jeez, get Disney + and watch the Mandalorian. Great Western! Anyway…..re those patches organized is the same geographic alignment as they would be on a map? Thank Santa there is not a Coast Guard patch up there!

Can you honestly suck up to Gail any more? “I took her leadership tips, posted them on my door and put a wreath around them.” I bet you have a Joanna Gaines tattoo on your lower back.

Had you gone all in with the Jimmy Buffet theme, you’d be the win. BUT, two door mats is like have the nice hand towels in the half bath for guests to look at BUT NOT USE AT ALL! Step over the good one. Well, which one is the good one?

The runner up is Honoring our Heroes. Obvious effort went into getting the patches and putting others before oneself pretty much sums up what it’s all about, right? (Tim Reichel)

The winner is the terribly unsafe, out of proportion, big-elf having chimney! Love seeing those Red Crossers at work, enjoying each other’s company and serving our clients.  Obvious time (not safety efforts) went into this effort. (Teresa Greenlief and Carrie Shultz)

It’s the spirit of giving that makes this holiday special. Every gift is a reflection of love that exists in our hearts. Merry Christmas to all and to all a good night!

And more entertaining comments from the judge

(Editor’s note: The winner of the annual Northeast Ohio Region Disaster Cycle Services (DCS) Holiday Door Decorating Contest has been announced by John Bernard, the Crossroads Division Disaster State Relationship Director.  Like last year, we found his comments to be so entertaining that we are including them, along with photos of all 9 doors entered in this year’s competition.)

Emily Probst, Regional Disaster Workforce Engagement Manager
Dept of Misfits.  This is Mike Park’s office door isn’t it? But, I zoom in and see a bunch what I think are disaster personnel.  Tim as Santa Claus. That fits, given his RDO (Regional Disaster Officer) exception rate! There’s Renee as Bumble. Not sure who did this door– but Renee – you do realize they pushed Bumble over a cliff and later removed his teeth a la Old West style?

Debbie Chitester, Disaster Program Manager, Summit, Portage and Medina Counties Santa Down the Chimney.  Wonderful use of space – vertical door/chimney– Santa. Kicked it three dimensional with the smoke alarms.  Kind of ironic, isn’t it; smoke alarms down the chimney?

Mike Arthur, Disaster Program Manager, Lake Erie/Heartland Chapter South
Oh wait, THIS is Mike’s door. Nope, couldn’t be, otherwise it would be white with an orange stripe and a star on it.

Tim O’Toole, Regional Disaster Officer, AKA Batman
What am I seeing here?  Is this like Halloween costumes tacked up on a door?  Can’t decide if the door is a chimney Santa is scaling up or he’s going Airborne and parachuting with a quick release on his pack before he hits the dirt.  I was going to make Buffalo Bill/Silence of the Lambs reference but thought that might be too dark.  Moving on…..

Jeremy Bayer, Disaster Program Manager, Greater Cleveland Chapter
Ah, the good ole “Wrap the door as a present – wait, it needs more – here, let me hot glue this Christmas stuff up there – perfect” routine.  This just screams “I spend an inordinate amount of time at Hobby Lobby and they call by my nickname at the checkout – ‘Craft-alicious.’”

John Gareis, Regional Preparedness Manager
A Christmas Story. First off, you’ll shoot your eye out with that thing.  Second, you can expect that ATS (American red Cross Training Services) will release “How to stay safe and healthy during the Holiday Season” talking points two weeks AFTER someone has injured their tongue by sticking it to a frozen light post.

Rick Whitehead, Regional Community Partner and EMA Manager
Aloha.  How very Christmas-y.  The three stockings really bring it home, ya know?  Can you feel the eye-rolling from Cincinnati?

Tim Reichel, Disaster Program Manager, Stark and Muskingum Lakes Chapter
Wow – two actual elves.  They sure do look seasoned…..I mean, seasonal.  I can see they took a long time to tape up that red table cloth left over from the Regional Training Institute and then add some basic Christmas stuff.

Hands down, A Christmas Story wins it! You knew it when you did it.  Fantastic job!  Second place, is the Department of Misfits! Third place – against my better judgment – Santa down the chimney…2.5.

Disaster Service staff members got into the fun of the holiday season with an office door decoration contest. 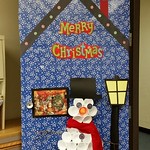 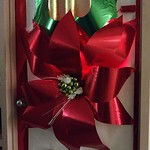 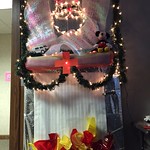 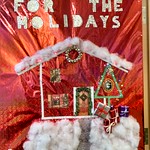 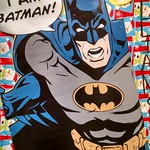 The contest was judged by the Crossroads Division Disaster Director, Janine Brown.

Click the image below to view all of this year’s festive doors! 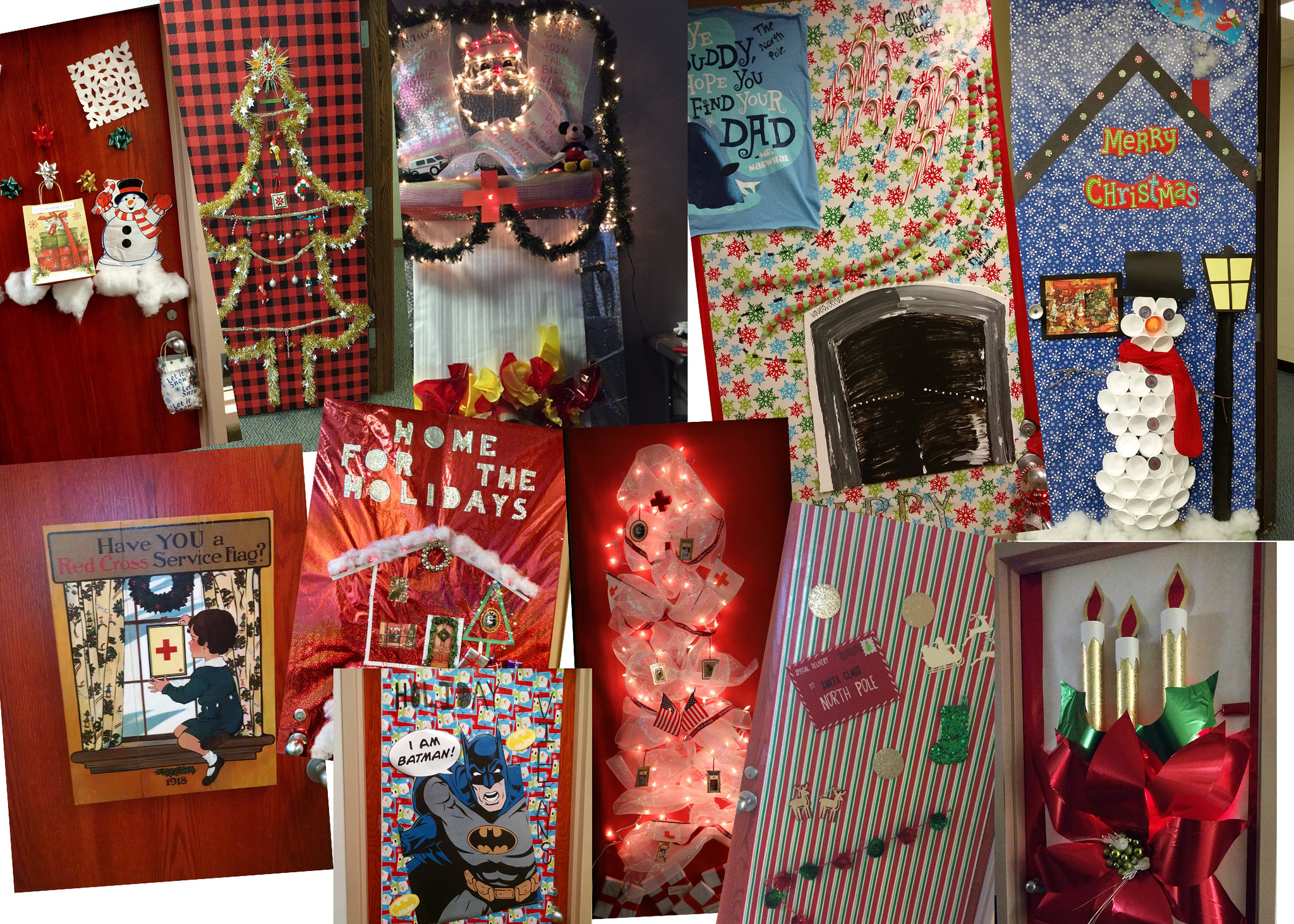