December 19, 2019- Editor’s note: The winner of the 3rd annual Northeast Ohio Region Disaster Cycle Services (DCS) holiday door decorating contest has been announced by John Bernard, the Crossroads Division Disaster State Relationship Director. Like in previous years, we found his comments to be so entertaining that we couldn’t resist including them, along with photos of all 7 doors entered in this year’s competition.

OK, third year in a row. Was hoping for an upward trend. But, I suppose even Santa had tough years – that’s why he hired that bullied kid with the weird nose after all. Anyway, here we go.

Entire door decorated – with wrapping paper and an anorexic Santa straddling a let it snow ornament. Is this a Santa-came-in-like-a-wrecking-ball theme, borrowing from Miley Cyrus? First, that was 2013 and second, no one wants to see a naked Santa. So, thank you for at least putting clothes on him. I would have suggested a more timely approach – maybe Baby Yoda as Santa? 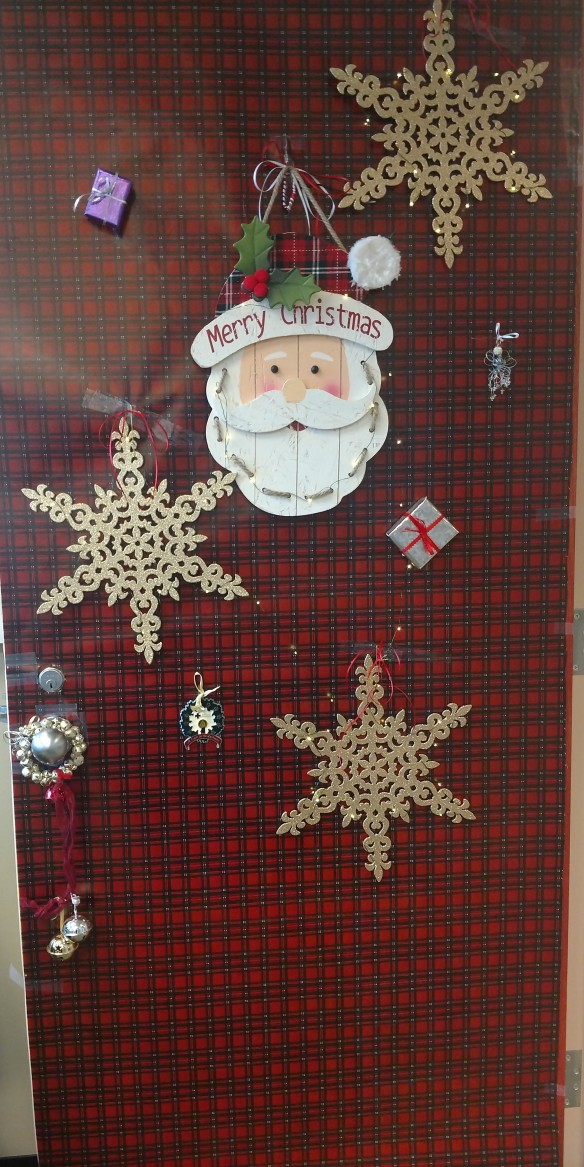 At first glance, meh. BUT, the Santa head is really nice. Very primitive – which is an “in” thing as far as decorating, as my wife tells me.  It’s not a chinoiserie Santa, but it’s still hot! Thank God it’s not “simple,” “clean” and made from “shiplap.” The long reign of terror under Joanna Gaines has come to an end!

Did we NOT cover this a year ago?  We do NOT do fires. Especially ones with so much inflammable….wait a second, flammable….wait, let me get my thesaurus……..WHAT?  They mean the same thing. Well, regardless, so much stuff above it that can catch on fire! Yeah, that snowman would have melted. Holy Santa, look at the size of that one elf in that photo! He’s like 8 feet tall! Must be related to Buddy from the movie. 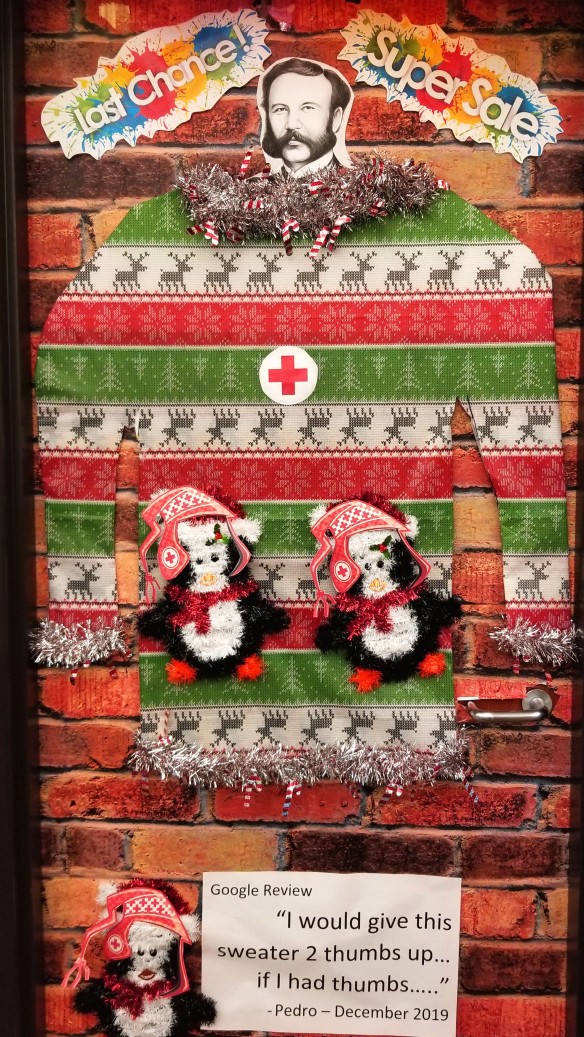 Tim O’Toole added the following comments on the door: I think the incorporation of the Pedro theme was very well thought out, however, Pedro lacking both thumbs and fingers, it is unclear how he would have typed the associated message.  So obviously some foul play here. 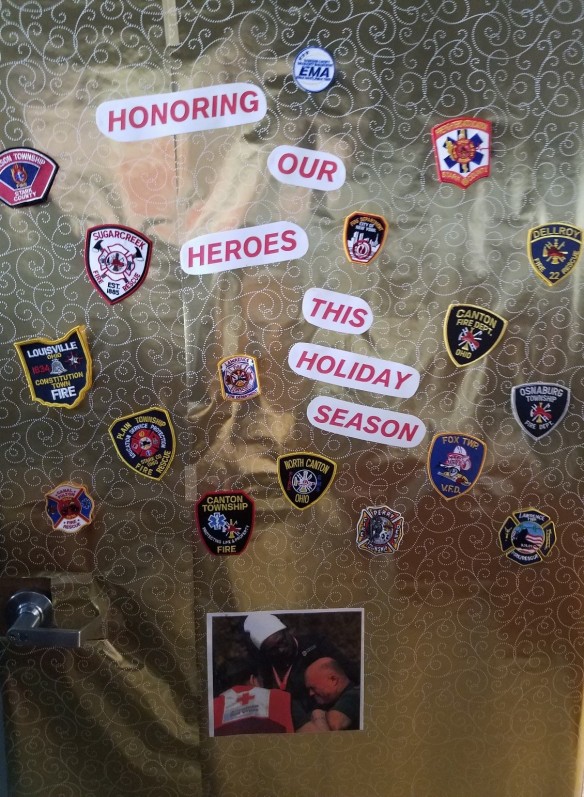 Going for the heartstrings approach, huh?  Might as well have put baby Yoda up there again.  Wait, you don’t know about Baby Yoda?  Jeez, get Disney + and watch the Mandalorian. Great Western! Anyway…..re those patches organized is the same geographic alignment as they would be on a map? Thank Santa there is not a Coast Guard patch up there! 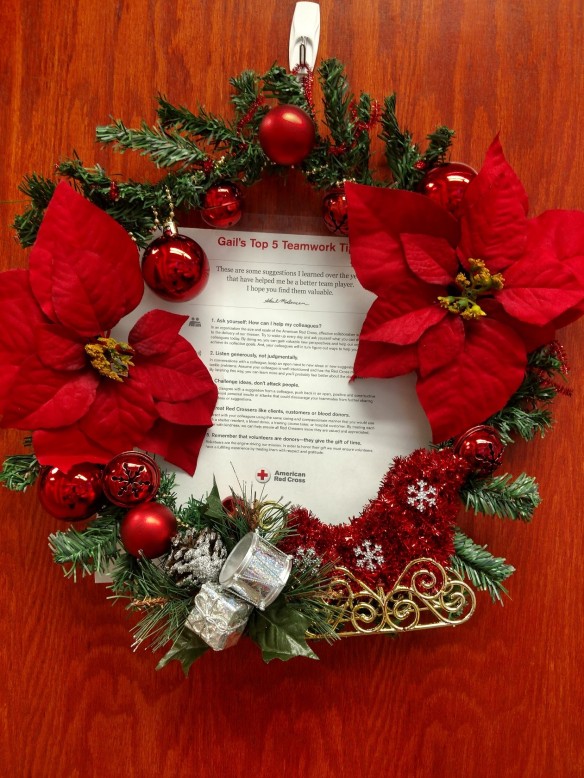 Can you honestly suck up to Gail any more? “I took her leadership tips, posted them on my door and put a wreath around them.” I bet you have a Joanna Gaines tattoo on your lower back. 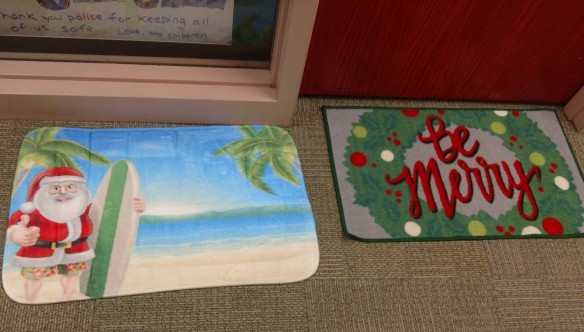 Had you gone all in with the Jimmy Buffet theme, you’d be the win. BUT, two door mats is like have the nice hand towels in the half bath for guests to look at BUT NOT USE AT ALL! Step over the good one. Well, which one is the good one?

The runner up is Honoring our Heroes. Obvious effort went into getting the patches and putting others before oneself pretty much sums up what it’s all about, right? (Tim Reichel)

The winner is the terribly unsafe, out of proportion, big-elf having chimney! Love seeing those Red Crossers at work, enjoying each other’s company and serving our clients.  Obvious time (not safety efforts) went into this effort. (Teresa Greenlief and Carrie Shultz)

It’s the spirit of giving that makes this holiday special. Every gift is a reflection of love that exists in our hearts. Merry Christmas to all and to all a good night!