September 11, 2019- This year marks 18 years since the tragedies of Sept. 11 occurred. Each year I reflect upon that time and remember those who were lost, but also the good work of people that rushed to the Twin Towers, the Pentagon and Shanksville, Pennsylvania, to help. I remember the support that was given to everyone affected, either directly or those coming to help the ones in need. The following is what I wrote after I returned from three weeks working in New York City. I still reflect upon it often.

I have witnessed probably the largest outpouring of volunteerism in my lifetime. In New York City, the American Red Cross processed 21,000 volunteers by Oct. 11, 2001, one month after the tragedy. 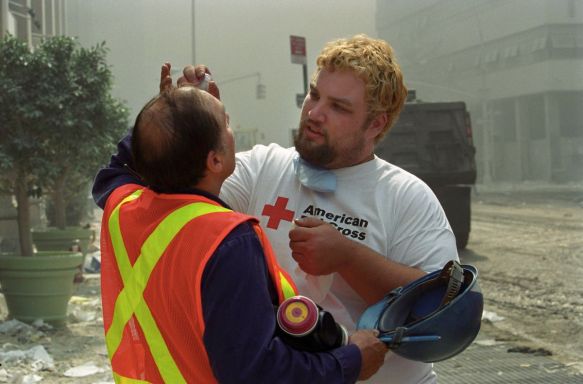 The local volunteers came out in spontaneous droves — literally 24 hours a day — giving truth to the phrase “New York: The City that Never Sleeps.” People of all races, creeds and religions came out to help. From caterers to computer operators, from men in suits to women in hard hats, flight attendants, retired phone operators, out-of-work actors, working actors, college students, musicians, nurses, doctors, psychologists, rabbis and even a medium — socioeconomic status did not matter. This city joined together to heal itself.

And that is how we viewed this . . . a healing process for the residents of the New York metro area. Most did not care what they did, just so they could help. They were drivers, data entry specialists, family services and respite center workers, cooks and greeters. No job was too small.

On the corners were groups of people with large signs saying, “THANK YOU” and cheering. At first I thought, “Well they must think we are firefighters or police.” Then we stopped at the corner and they saw the Red Cross and they said, “Thank you, Red Cross!” Driving through checkpoints late at night after a VERY LONG and stressful day, the police officer that checked IDs said, “Hey Red Cross, thanks, you are doing a great job!” That made us all feel good. This was not only at the beginning of my journey; I saw those signs when I left three weeks later.

It was difficult to leave this operation. Usually when I leave, the job is coming to an end, and I transition to the local chapter to carry on the job of recognition and follow-up. Not this time. We knew that the work was not done, and we needed to go home to our other “families.” But there was a feeling of accomplishment knowing that so many New Yorkers helped their community.