Grandparents Day is not a national holiday, but rather a day of observance. Most people get the day off; but only because it occurs on a Sunday. That said, there is so much grandchildren can learn if their grandparents take the time to share.

For example, I’d like to share with my older grandchildren the joy of volunteering. I’ve been with the American Red Cross for exactly three years today, and I can recall so many wonderful memories of times I was able to help someone.

When a family has experienced a terrible fire and have lost everything they own, helping them realize there is hope for the future and helping them start that rebuilding process is a joy I get every time I respond to a fire in our community with our Northeast Ohio Region’s Disaster Action Team.

When I give blood, I’ve learned that every pint I donate could help as many as three different people. For the 42 pints I’ve donated, that’s up to 126 people. On the other end of the spectrum, I’ve talked with someone who required more than 330 units of plasma in just under two weeks to keep her alive. Having enough blood on the shelves is always important for whatever emergency might come next. I suggest that all my college-age grandchildren try to donate blood.

I’ve also shared the story of a homeless man in California that I met after the giant Camp Fire last year. He was born in Ohio but moved to California because there was “too much traffic” in Warrensville Heights, where he was born. At the time of the fire he was homeless but happy, living in the woods outside of Paradise, CA. He enjoyed being able to tell his story to someone who knew about his original hometown, and we talked for hours. Sometimes a person in distress starts to heal by just having someone to talk with.

I also share that while the Red Cross responds to disasters and helps people recover after a disaster, we also help people prevent and prepare for disasters. With all the Red Cross apps for mobile phones, two are especially good to share with grandchildren: the Monster App and the Swim app. They can easily download either one by texting “MONSTER” or “SWIM” to 90999. 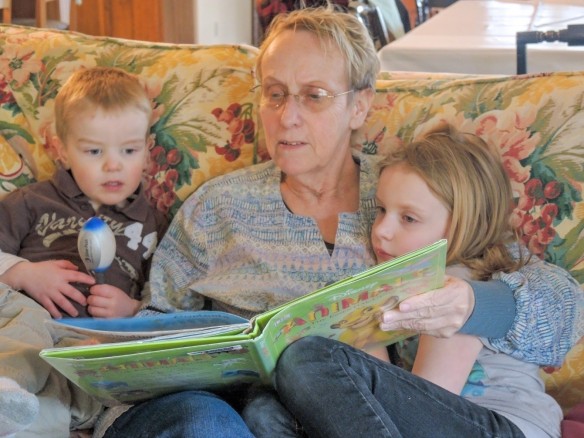 So on this Grandparents Day, take your children to talk with their grandparents and see what wisdom they have to share. Or if you are a grandparent and don’t already have an abundance of stories to share, consider volunteering with the Red Cross. You’re guaranteed to have some soon enough for next Grandparents Day.

For more on the history of Grandparents Day

National Grandparents Day falls each year on the first Sunday after Labor Day. It was initiated at the grassroots level by West Virginian Marian Lucille Herndon McQuade. She and her husband had 15 children, 43 grandchildren, 10 great-grandchildren and one great-great grandchild. And she still found time to lobby state and federal leaders to create this day of observance.

It was in 1979 that President Jimmy Carter proclaimed the first Sunday after Labor Day each year as National Grandparents Day. September was chosen to signify the “autumn” years of life.