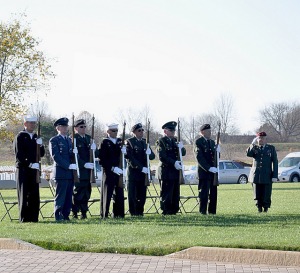 American Red Cross of Northeast Ohio Family Members:   Yes…it’s Veterans Day and we have Red Cross members representing us in parades and festivities around the country in honor of those who have served our grateful nation.  For those of you who are veterans—thank you for your faithful service.  For those of you who have family members who are or were veterans, thank you for supporting them.  As every person who has worn the uniform of this country will attest—support from family and friends was crucial to their success.    And thank you to all the Red Crossers who support our Servicemen and Servicewomen every day of the year.

Here is a blog post that I thought you might find interesting from the Senior Vice President for the American Red Cross’ Service to the Armed Forces (SAF), Koby Langley, it really gets to the heart of why we do what we do.

As we pause from our Red Cross duties to reflect on Veterans Day, I thought it fitting to share some historical thoughts with you about one of the American Red Cross’ most distinguished leaders who was also arguably one of the greatest military leaders in our nation’s history, General George C. Marshall:

“By the summer of 1949, President Truman was mulling over means of bringing Marshall back into public service as head of the American Red Cross. There were signs that Basil O’Connor, head of the American Red Cross since 1944, might soon retire. Why not, thought the President, give Marshall that job? It would associate him again with public affairs in a way that carried fewer burdens than had his previous appointments.

Basil O’Connor had been named by President Roosevelt to succeed Norman Davis as Chairman of the Red Cross when Davis died in 1944. O’Connor was very hardworking but had managed to offend and alienate some of the older Red Cross leaders. Many of the disagreements had been smothered during the war, when the Red Cross had given outstanding service to servicemen, refugees, prisoners of war, and others desolated throughout the world.

Part of the trouble came from the apparent domination of the organization in the late thirties by wealthy and socially prominent Eastern-establishment figures on the Red Cross board of governors. Active heads of chapters in other cities and regions complained that they had no voice in operations. Volunteer workers, a highly important part of the Red Cross’s activities, charged that they were not used or involved in decisions. These charges and complaints boiled down to the bitter feeling that a very few people ran the organization.

In 1946, the Red Cross made a decision to create a special committee headed by E. Roland Harriman, Averell Harriman’s brother, a partner in Brown Brothers, Harriman, and manager of the North Atlantic region of the Red Cross during the war. He and his committee members undertook to meet some of the chief complaints of others in the organization, and their proposed changes were approved by Congress and President Truman in the spring of 1947. The President of the United States was to appoint the President, and the board of governors was enlarged and rearranged to give far more representation to the chapters. Chairman O’Connor now became President.

Despite O’Connor’s efforts to stop controversy, sharp criticism persisted. By 1948, it was evident that the organization needed a leader of great stature who had not been associated with the infighting, and who could respond to the claims of all factions without prejudice. O’Connor made it plain that he was ready to step down.

Truman naturally thought of Marshall. His appeals for the European Recovery Program were of the exact kind needed by the American Red Cross. During the war he had sought public support for Red Cross drives, and his war’s-end reports praised the organization’s service to the men of the armed forces and their families. His 1948 speeches for ERP showed his effectiveness in convincing the same types of people that the Red Cross needed. Few were aware of another factor that made him so desirable as O’Connor’s successor. As Pershing’s aide in France after World War I and later in the United States, he came into contact with many Eastern- establishment figures, whose influence was still needed by the Red Cross. He was perhaps the one person who could bridge the gap between the factions…”

“Marshall set out to eliminate friction, to fire the workers with enthusiasm, to smooth out dissension. In the early months of the year he spent as head of the Red Cross, he was on the road constantly. In the last months, the coming- of the Korean War gave added emphasis to the Blood Bank program, and to morale-building services concerned with the troops and their families, thus gaining added support for overall programs.

The number of personal trips he made surprised even him. Near the end of 1949, he wrote Queen Frederika of Greece, who had asked about his new job, that although he was at Pinehurst for the winter, he would be traveling constantly on Red Cross business from January 15 until March 7, some 20,000 miles. Since taking over in October, he had covered 9,000 miles. In fact, he said, he would be increasingly busy until he took a few days off for rest in August.”    From George C. Marshall: Statesman 1945-1959 by Forrest C. Pogue