May 8, 2020- May 8 marks the 75th anniversary of the Allied victory in Europe during World War II, known as V-E Day (Victory in Europe Day). To help honor it, I spoke with veteran and American Red Cross volunteer Jim Buccini about his father, Charles Buccini, a WWII veteran and former Prisoner of War (POW).

Charles Buccini’s life and outlook are inspiring. Orphaned at a young age, Charles went between foster homes until, at 13, a family in Bellevue, Ohio, took him in. Charles lived and worked at the family’s farm until he was 21, when his foster brother was drafted. To help the family, Charles took his place. 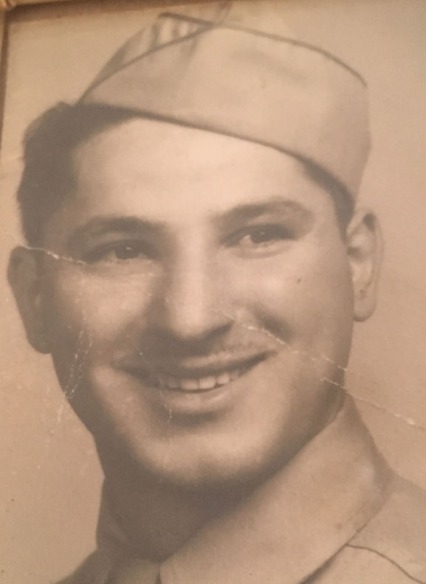 Charles saw action in Europe with the United States Army 9th Armored Division, 73rd Artillery Battalion, until he and around 900 others were captured on December 18, 1944.

Charles spent the next six months as a POW. Food was scarce, and the POWs were often moved through long marches and packed box cars, staying in stalags and bombed-out buildings. Charles dropped from 165 pounds to 100 pounds, and nearly half of his group did not survive.

Charles rarely spoke of his time as a POW. In fact, Jim first heard many accounts in 1978, when he took his father to visit John Taibi, a friend and fellow POW. While the two often communicated, they hadn’t seen one another since being liberated. Jim relayed how emotional it was to witness their first meeting in over 30 years, hearing the stories, and realizing the extent of his father’s heroism.

Jim learned more through John Taibi’s diary, which describes hardships, relief of a Red Cross package and the day they were liberated. They woke, saw no Germans, heard American voices, and realized they were free.

Although his time as a POW caused lingering issues, Charles never complained and took pride in his service. Jim said when asked about difficulties, his father was spiritual and pragmatic. Charles explained that some things are left in God’s hands, it was all part of life and you deal with it.

Charles saw each day after liberation as a bonus, a gift. Following the war, Charles worked as a pipefitter for 36 years, focused on his family and helped others. Charles passed away in 1991. On April 11, 2019, several family members and friends gathered at his gravesite for his 100th birthday.

Charles inspired many, especially his children, and helped instill confidence and caring. Two of them, Jim and his older brother, Chuck, are also Army veterans. Chuck’s service included a year in Vietnam. Jim was stationed near the Berlin Wall. Like many in his family, Jim helps others. After retiring in 2016, he volunteered with the Red Cross where his duties include Services to the Armed Forces.

People like Charles Buccini helped overcome one of humanity’s greatest challenges. For Jim and Chuck, his lessons help during another crucial time. As we now face a pandemic, Jim looks to his grandchildren, remembers his father and remains confident. Throughout this time, it may help us to follow Charles’ example and see each day as a gift.