Volunteers of the Greater Cleveland Chapter brought home a winner on Saturday, June 22, 2019, gathering at Classic Park in Eastlake to watch the Lake County Captains play the West Michigan Whitecaps. It was Heroes Appreciation Night at the ballpark, and some American Red Cross hero volunteers took advantage of the offer to go to the game free of charge to recognize their vital contributions to the Red Cross mission.

Fans of the Lake County Captains, a Class A affiliate of the Cleveland Indians, weren’t disappointed. The Captains beat West Michigan 5-2.

“We can’t think of a better place to honor our heroes, our Red Cross volunteers, than at a Lake County Captains game,” said Mike Parks, Regional CEO of the Red Cross of Northeast Ohio.  He then led the crowd as they sang “Take Me Out to the Ballgame” during the 7th inning stretch. 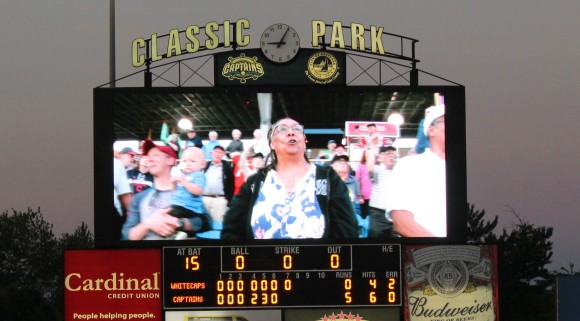 Before the game, Mike threw out one of the ceremonial first pitches. Afterward, he claimed the Burning River jersey he was awarded for submitting the highest bid. It was autographed by Captain’s pitcher Thomas Ponticelli, who led  the Captains with a combined no-hitter the night before.

Volunteers received vouchers for free parking and a meal, so they didn’t have to spend a dime to have good time at the ballpark. It was a great evening of summertime baseball and a fun way to reward the dedicated volunteers who pitch in to help the Red Cross serve up  relief on a daily basis for community members in need.