January 25, 2019 – I thought I might go to Houston for Hurricane Harvey in 2017. I didn’t. I got a mission card (for expenses) and was on standby for Hawaii’s Kilauea volcano in 2018,  but we weren’t needed there either. That’s how it can go with national disaster deployments.

So, I was wondering if the third time was the charm, as I drove to downtown Cleveland to Red Cross regional headquarters to pick up my mission card for the California wildfires.

The Camp Fire had started on November 8 and wasn’t contained until the end of November—after obliterating the majority of Concow, Magalia and Paradise, California.

I didn’t have to wonder long, as my plane reservations were confirmed two days later. I was scheduled to leave Saturday, December 29. After typical winter weather delays and cancellations, I finally arrived in Sacramento, and checked into the hotel at 1 a.m.

Sunday morning, I was picked up at the hotel and processed at the Yuba City Red Cross regional office before heading for the shelter in Chico, Ca., roughly 1-1/2 hours north of Sacramento. We’d be working at the Silver Dollar Fairgrounds, where more than 700 residents were staying in three men, women and family dorms, as well as a combination of camping tents, cars and RVs.

Some staff were being housed about 60 minutes outside town in a series of hotels but I stayed in the staff shelter, just 12 minutes from the fairgrounds. Our shelter was a series of tents, set up on the Chico Airport grounds. 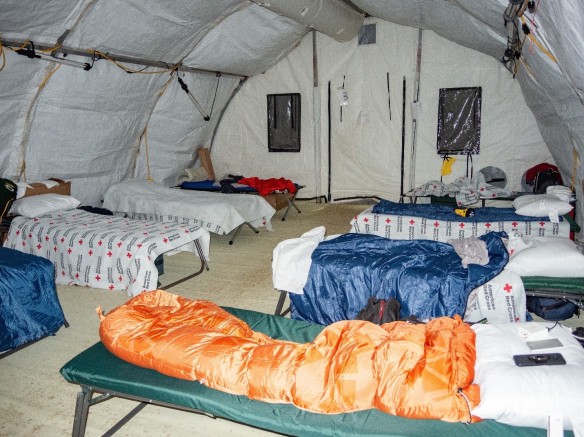 A large circus tent was our home away from home for everything but sleeping and showering. Showers were in a trailer, but hot water was in ample supply—most of the time. The staff tent handled registration, feeding and supplies. Two large screen TVs provided a choice of entertainment and a dozen sofas were there to relax on. Internet bandwidth was amazingly good for those who preferred to stream their own entertainment or keep up with social media.

My first day, I had a chance encounter while standing and looking at the fairground’s small waterfall, just inside the main gate. I could sense someone behind me and turned to see a tall gentleman, one of the evacuees people referred to as “Buckeye.” When he discovered I was also from Ohio, I got the biggest bear hug I’ve ever received. Turns out his family is from Warrensville Heights. 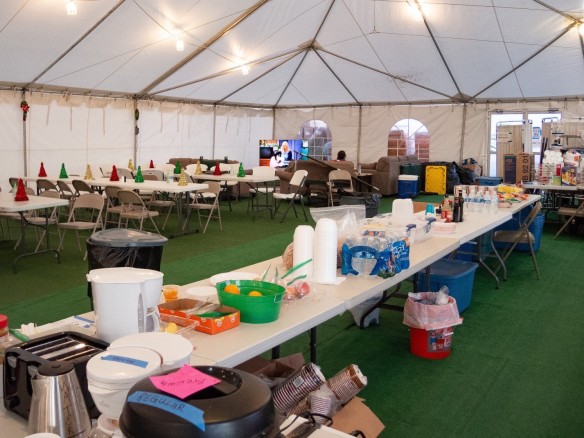 At the fairgrounds, almost 200 Red Cross volunteers, working 12-1/2-hour shifts, and numerous community partners, provided a host of services to the residents. The ultimate goal was to get everyone transitioned into permanent housing. In the best of circumstances, this can be difficult but the city of Chico already had a housing shortage. Luckily, the U.S. Department of Housing and Urban Development (HUD) committed to assisting those who couldn’t qualify for Federal Emergency Management Agency (FEMA) housing.

As people stayed at the fairgrounds, they each received three meals a day, a cot, blankets and a large, fluffy pillow. Paradise Equipment had a laundry trailer on site and everyone was entitled to free laundry service. They could just drop off a bag of clothes and pick it up later in the day—washed, dried and folded. Health needs were addressed for people and their pets. Residents received a range of health services as well as mental and spiritual counseling. Pets were vaccinated, fed and walked by a local pet relief organization.

By the numbers, here’s what was going on 60 days into the Camp Fire disaster.

The Red Cross continues to provide shelter, meals and conversation for almost 700 evacuees, who are having trouble processing the idea of having lost everything. Not only are their houses gone, in many cases, they’ve also lost their jobs, their churches, schools, restaurants, social clubs and their friends.

If you’d care to donate, you can do it online at RedCross.org or by calling 1-800-HELP NOW.

Editor’s note: During his deployment, Doug escorted documentary filmmaker Nancy Hamilton of Golden Eagle Films through the shelter compound. She spoke with some of the shelter residents and offers her impression of the operation at the end of the video, which has been posted on Facebook.