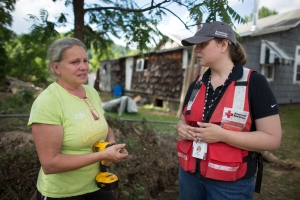 In a year that set new records for severe and devastating weather, the Red Cross provided more assistance to the hundreds of thousands of people impacted by these disasters all across the United States than in the past two years combined.

“People impacted by disaster are facing what can be their darkest days. This year a seemingly endless chain of disasters affected hundreds of thousands of people and the Red Cross was there, helping,” said Mike Parks, Northeast Ohio’s CEO. “But we need your support now to continue providing help to families affected by disasters.” The Red Cross depends on generous financial donations to provide services.

As of December 4, the Red Cross provided the following help to people impacted by disasters across the country this year:

Amidst all of these devastating events, home fires continued to be the largest disaster threat in the United States. During 2016, the Red Cross provided casework assistance to help 79,000 families recover after a home fire left them with nowhere else to turn. The Red Cross and thousands of local partners are also working to help prevent home fires, deaths and injuries. Since 2014, at least 116 lives have been saved through the Red Cross Home Fire Campaign, locally known as Operation Save-A-Life, a total of 574,000 smoke alarms have been installed, and 625,000 youth have been taught about fire safety.

Here in the Northeast Ohio Region, the Red Cross responded to over 970 home fires across 22 counties and provided more than $720,000 in financial assistance to those local families affected by disasters. Through the help of community partnerships, the Red Cross installed over 13,000 smoke alarms from July 2015 to June 2016.

Before Hurricane Matthew hit the United States, the storm made landfall in Haiti, leaving widespread flooding, damage to infrastructure and major crop and livestock loss. The American Red Cross delivered critical relief, including supplies to reduce the increased threat of cholera in the country.

A massive wildfire in Alberta, Canada threatened dozens of communities in the spring. The American Red Cross deployed almost 100 employees and volunteers to help.

A 7.8 magnitude earthquake hit Ecuador in April, cutting off remote communities and causing severe damage to the country’s infrastructure. Red Cross societies from all over the world stepped in to help.

2016 has been the deadliest year for refugees in the Mediterranean Sea, with more than 4,000 people dead as they try to cross from Libya to Europe. The American Red Cross has contributed funds to help meet the needs of refugees and migrants seeking safety and a better life in Europe, including the deployment of a disaster specialist aboard a rescue vessel in the Mediterranean Sea.

HOW YOU CAN HELP The Red Cross depends on the generous support of the American public to assist people affected by disasters. If you would like to help, please consider making a donation today by visiting http://www.redcross.org/neo, calling 1-800-RED CROSS (1-800-733-2767) or texting the word REDCROSS to 90999 to make a $10 donation.