Nearly 100 homes in Euclid now have working smoke alarms, following one of the largest Fire Safety Walks ever held in Northeast Ohio.  283 smoke alarms were installed on Saturday, August 6, 2016, with the enthusiastic help of volunteers from Lincoln Electric and our partners at the Euclid Fire Department.

“We were able to get into 95 homes and install 283 alarms. That is approximately 3 per home,” said John Gareis, Regional Manager of Preparedness and Community Planning in Northeast Ohio.

Combined with a similar effort last summer involving Lincoln Electric volunteers and the Euclid Fire Department, almost 650 smoke alarms have been installed in that Euclid neighborhood as part of Operation Save-A-Life, the American Red Cross initiative in Northeast Ohio to reduce the number of casualties in home fires by 25%.  John Gareis continued, “While the total number of alarms is less than last summer, our targeted area has far fewer homes in them – making this install more efficient overall!”

As was the case last summer, Lincoln Electric CEO Chris Mapes worked alongside employees to install the smoke alarms, and to provide residents with valuable fire safety information.  And Mike Parks, Regional CEO of the Red Cross in Northeast Ohio contributed to the effort, along with Red Cross volunteers and staff.

“The partnership between Lincoln Electric, Euclid Fire, and the American Red Cross is a winner to be sure and a model for others, not only in the Region but throughout the country,” Parks said.  “I know the event had an extremely positive impact, and will help prevent the loss of life due to home fires.”

Last year, more than 100 lives across the country were saved after smoke alarms were installed by the Red Cross and our partners.

Home fires remain the biggest disaster threat to individuals and families in the United States. There are three home fires, on average, in Northeast Ohio every night. Operation Save-A-Life, part of the national Red Cross Home Fire Campaign is in direct response to that dire threat, with the Red Cross committing to install 2.5 million free smoke alarms in neighborhoods at high risk for fires, and to educate those residents about fire prevention and preparedness.

More than 12,500 smoke alarms were installed in homes in Northeast Ohio last year.

If you would like a free fire safety inspection of your home, and free installation of smoke alarms, log onto redcross.org/neoosal.  You can also visit redcross.org/homefires to find out more about how to protect you and your family from fire. You can also become a Red Cross volunteer. And you can help by donating to Red Cross Disaster Relief by visiting redcross.org, calling 1-800-RED CROSS or texting the word REDCROSS to 90999 to make a $10 donation. Donations to Disaster Relief will be used to prepare for, respond to and help people recover from disasters big and small. 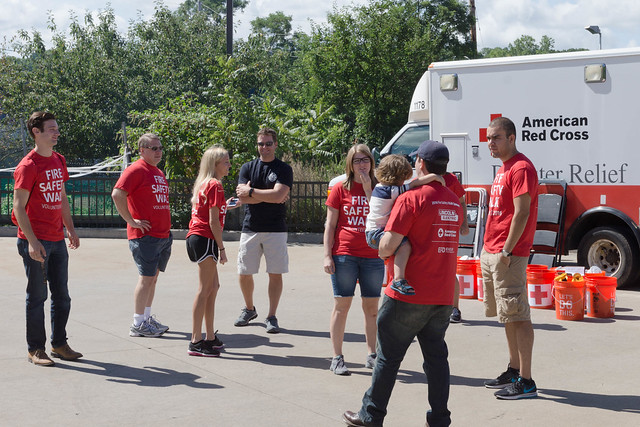 Click on the photo to see a gallery of pictures taken during the Euclid Fire Safety Walk.