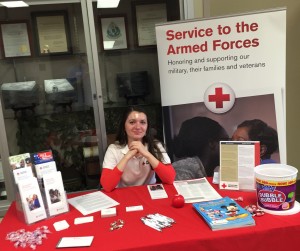 My name is Ani Stone and I am a Service to Armed Forces (SAF) volunteer. I have been volunteering for the American Red Cross since September 2014.

I moved to the United States in 2008 to pursue a graduate degree in Religious Studies and during my studies I volunteered for a Holocaust education program for middle and high school students. Upon graduation, I volunteered as a Romanian translator for elderly Romanians seeking medical or social assistance from government. When I moved to Stark County nearly four years ago, I continued my translator work, but the distance made work more difficult. I was looking for a new opportunity to enrich my life through volunteering, but was not sure which opportunity was the best. I decided to look at the American Red Cross, as the organization had a great reputation in Europe as well and I was more familiar with it than the other organizations in the area.

I had my first interview via phone and then a face-to-face follow up, and when I was told that there was an opening to volunteer for the Service to Armed Forces division, I made my decision. I was looking for a chance to make a difference and help through my volunteering work, and I knew my efforts would be meaningful as a SAF volunteer.

There is no higher honor than serving your country and protecting the public, including those who antagonize you. It’s an honor to serve those who work in this function.