Ambassadors of Goodwill live up to their name, designating Red Cross as official charity

The Original Harlem Globetrotters are appearing in more than 250 cities during their 2017-2018 tour, and fortunately, four cities in Northeast Ohio were among them.

Fans got to see the the high-flying team play in Cleveland, Canton, Youngstown and Wooster after they kicked-off their North American tour in December.

The American Red Cross is the official charity of the Globetrotters, and during many of the games, fans got the chance to help provide critical funding for disaster relief, as Red Cross volunteers went out into the crowd to “Pass the Bucket.” 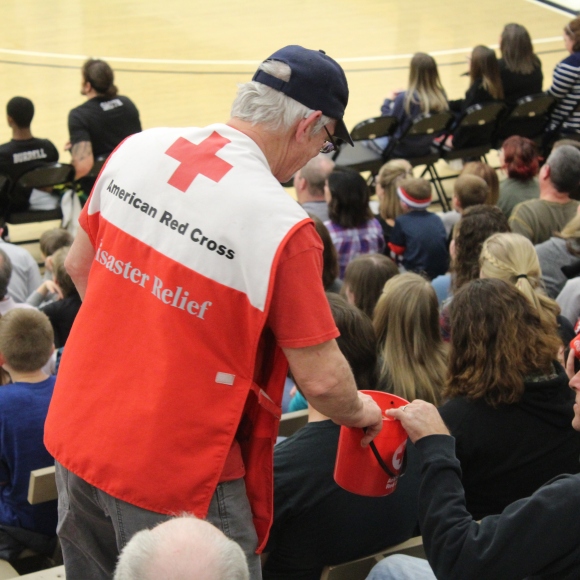 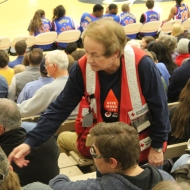 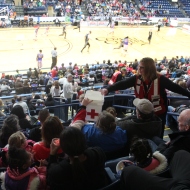 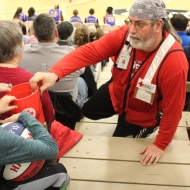 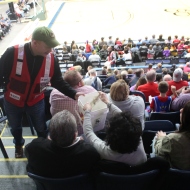 Donations made at Globetrotters games will help the Red Cross assist residents in local communities when they experience a disaster, like a home fire.  Our disaster workers, most of them volunteers, respond to about 64,000 disasters a year – the vast majority of them home fires.

The partnership between the Globetrotters and the Red Cross is part of the team’s “Great Assist” initiative. They pledge to spread 100 million smiles over the next 10 years with smiles, sportsmanship and service.

Dozens of volunteers fanned out at the Covelli Centre in Youngstown on Saturday with buckets in hand, hoping for donations at the Harlem Globetrotters  game.

“The crowd was fantastic.  Most everyone dug into their pockets to put a buck or two in our Red Cross buckets,” said volunteer Gary Offerdahl. “We got 5’s, 10’s and 20’s too. Most everyone was very generous.  And not only did we collect some money for the Red Cross, we had a lot of fun, too.”

The Globetrotters have designated the Red Cross as their official charity, as part of the team’s The Great Assist initiative.  The Pass the Bucket effort in Youngstown was the first such attempt to collect funds directly from fans at a Globetrotters game.

“This partnership brings two great American organizations together in order to achieve a common goal—to help people in need and to put smiles on people’s faces,” said Howard Smith, President of the Harlem Globetrotters.

“This was so worthwhile,” said Karen Conklin, Executive Director of the Lake to River Chapter.  “We got to meet a lot of the people we serve in the community, and we got to get up close and personal with some REALLY tall basketball players.  Our volunteers will remember this day for a long, long time.”

WKBN covered the effort, airing the story during the 11:00 news Saturday night.

If you aren’t able to donate to the Red Cross at a Globetrotters game, but would like to contribute to the life saving mission of the Red Cross, you can make a donation here, or call 1-800-RED CROSS.  You can also text the word ASSIST to 90999 to make a $10 donation.

Click here for ticket information and the schedule for the Globetrotters 2017 World Tour.

While the legendary Harlem Globetrotters raised the roof in Quicken Loans Arena, Red Cross volunteers raised awareness with an information table in the lobby across from Section 128.  It was a two-fold information, full-court press.

The Globetrotters have partnered with the Red Cross in The Great Assist initiative, helping Americans before, during and after local incidents or national disasters.

A large banner proclaimed “Join Us” and the information table was stacked high with handouts providing the details. Many people don’t realize the multiple ways they can become involved with Red Cross, and the brochure nicely lays out options for people of all talent, skill and interest levels.

The Globetrotters played two games on December 27; at 1:00 pm and again at 6:00 pm.  Separate volunteer groups manned the table at each game.

The table also displayed small signs with the same message that appeared courtside — “Text ASSIST to 90999 to donate $10.”  Again, something small that people can easily do, but when combined with thousands of others, can make a serious impact. 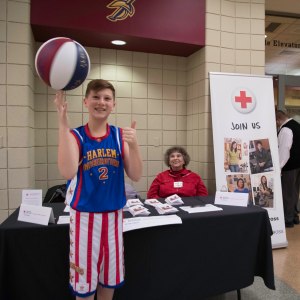 The table attracted a number of people, including Garrett Chapin (15) and his mother Laura. We wished we could have kept them longer, as Garrett demonstrated his spinning-ball-on-the-finger-tip trick.  Wearing a uniform just like the Globetrotters, he truly illuminated the area with blinking LED lights in his basketball shoes.

So, did the table do its job?

That’s probably an answer best left to the data analysts, but this writer does have a few opinions.

First, the more people see your sign or your logo, the more likely they are to remember you when the need arises.  Marketing 101 stuff, but it is a truism.

Secondly, it seems that people are so tired of seeing tables set up in the mall or airport, that they often shy away from a manned table, not wanting to get involved. Exactly the opposite reaction we were hoping for.

So, after staffing the table for more than an hour, and having 99% of our great brochures still sitting there, unloved, we decided to take the brochures on a road-show.

Walking around the entire Quicken Loans Arena lobby, if a person looked receptive, we approached and delivered a short message while handing them a brochure.  “The Red Cross is always looking for good volunteers if you or someone you know might be interested.” or “If you are looking for volunteer opportunities for yourself or someone in your family, the Red Cross would love to talk to you.”

In an hour, the brochures were gone, and a good 90% of them were met with smiles, with heartfelt “Thanks” and some with “I’ll definitely look it.”

Hopefully at the end of the evening, the announcements over the PA raised some money from the fans, and hopefully the brochures will further raise awareness of the many ways our organization contributes to the community.

Unless your ceilings are REALLY high.

Zeus McClurkin, a forward for the Harlem Globetrotters,  accompanied Regional CEO Mike Parks and other Red Cross workers and firefighters from the Cleveland Fire Department on Monday, December 12 to install smoke alarms in homes on Lawnview Avenue.

Residents who live in 25 homes in Cleveland’s Hough neighborhood are now safer, after Zeus and the rest of the volunteers installed 75 smoke alarms.

“Having working smoke alarms cuts the risk of injury or death in a home fire in half,” said the eight-year veteran of the team.  “I’m happy to help the Red Cross with this lifesaving mission.” 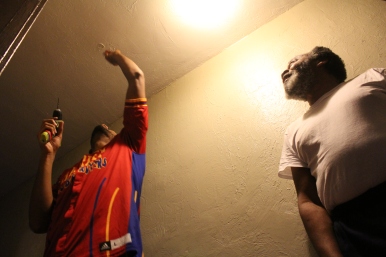 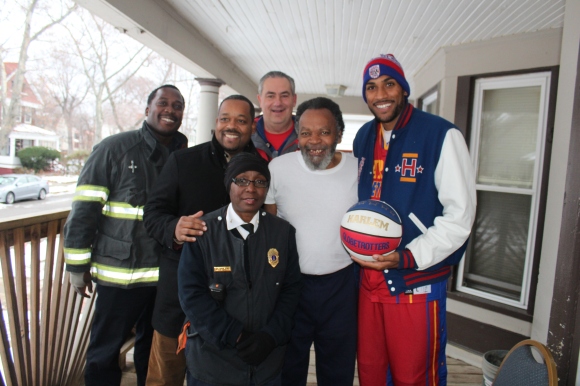 Since 2014, the Red Cross has installed more than 500,000 smoke alarms nationwide. Nearly 13,000 smoke alarms were installed in Northeast Ohio last year. Together with the Harlem Globetrotters,  local fire departments and other community partners, our goal is to install our one millionth smoke alarm by October 2017 to help Americans stay safer from home fires.

Every eight minutes, the American Red Cross responds to a disaster, most of which are home fires, which claim more lives annually than all major disasters combined. The Red Cross and the Harlem Globetrotters have teamed up through The Great Assist initiative to help communities across America to prepare for, respond to, and recover from disasters big and small. Join with us as we raise urgently needed funds to support families during times of crisis throughout the year. Your donation can bring help and hope to those who need it most. Text ASSIST to 90999 to make a $10 donation now that will truly make a difference.

In addition, the team played at the Canton Civic Center  on January 27, and at the Covelli Center in Youngstown on January 28.