We’ve been warned by the Better Business Bureau, law enforcement officials and others about the proliferation of scams this time of year.  Sadly, not everyone has the holiday spirit.  A scam that recently caught our attention involves a scammer impersonating someone in the military, finding a sympathetic soul online, and asking for cash under false pretenses.

“It happens too often,” said Jessica Tischler, Regional Director, Service to the Armed Forces, American Red Cross of Northeast Ohio.  “Scammers try to take advantage of vulnerable people who think they’re giving assistance to a member of the military.”

Romance scams are the most commonly reported scams, according to the U. S. Army.  The Army’s Criminal Investigation Command (CID) receives hundreds of allegations a month from victims who say they got involved with someone who claims to be a U.S. soldier online, on a legitimate dating website or other social media website.

Suspicions should arise if:

Other red flags include the scammer saying he/she is on a peace keeping mission, saying he/she can’t talk on the phone due to security reasons, and professes his/her love almost immediately, using terms of affection like “my love” or “my darling.”

An obvious warning sign is when someone who claims to be a U.S. military member does not have English and grammar skills that should match those of someone born and raised in the United States. 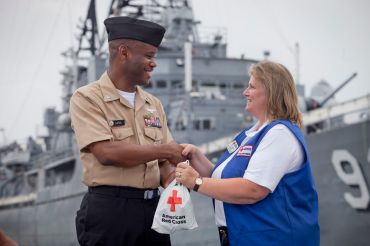 “Loved ones must have some specific information about the family member they need to contact, like name, rank, branch of service, social security number or birth date, and the address of their military unit. Non-disclosure of this information is another red flag that you may not be dealing with a legitimate service member.”

The Army CID urges anyone who feels they have been scammed by a someone claiming to be a member of the military to contact the FBI Internet Crime Complaint Center and the Federal Trade Commission.  The FTC Identify Theft Hotline is 877-ID-THEFT (438-4338.)