It’s fitting, but not intentional, that National Good Samaritan Day fell the day before we honored Greater Cleveland Heroes.

The day is also known as Good Samaritan Involvement Day. It is a day for unselfish actions to help those in need and to celebrate kindness.

The term “Good Samaritan” comes from the Bible parable where a Samaritan helped a stranger who had been robbed and beaten and left to die by the side of the road.  The Samaritan not only cleaned the man’s wounds and clothed him, but took him to an inn where he paid for the man’s care.

The term is used today to describe those who perform acts of kindness for those in need, especially those who are strangers.  Like the seven individuals we honored on March 15.

About 500 people attended the 2018 Greater Cleveland Heroes Award ceremony at the Huntington Convention Center of Cleveland, where the Cleveland Indians received the Community Leader Award.  See our photo album of the event here. 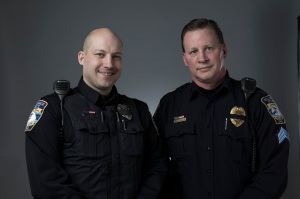 Patrolman Christopher Olup and Sergeant Robert Prochazka of the Willowick Police Department risked their own lives to enter a burning house and pull a disabled man to safety.

Gilbert DiSanto of Miceli Dairy used an AED and performed CPR to save the life of a man who had collapsed near the company’s headquarters in Cleveland.

Dana Walling was a customer at Classic BMW in Willoughby Hills when he helped two wounded police officers subdue a gunman.

Jared Lee of the MetroHealth System improvised by using the drawstring from his scrubs as a tourniquet on a severely injured victim of a car crash.

Jan Durkalski performed CPR and ran for help after her husband collapsed during a run in the Cleveland Metroparks, saving his life.

These seven individuals are the very definition of “Good Samaritans,” and we are proud to honor them for their selfless acts.

See our heroes tell their stories in their own words here.