From our Northeast Ohio chapters alone, 28 disaster staff were deployed throughout Ohio, Indiana and Michigan.  First and foremost, shelters were opened for those whose homes were in danger of flooding. A safe and warm place to stay was extremely welcomed by those affected. Health service related needs were also attended to by our other volunteers. 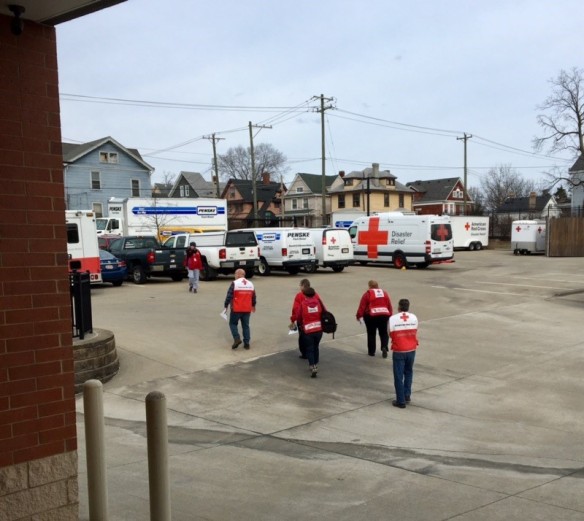 Monica Bunner, a Disaster Action Team member from the Summit, Portage & Medina chapter, was one of the first from this area to be deployed. Originally dispatched to a moderate-sized shelter in a high school in southern Ohio, she and her team provided a warm place to stay overnight as well as a place to come during the day to warm up, shower and recharge both the body and the cellphone.

Monica recalls one of the first residents to come to the shelter (and probably the last to leave) was an elderly gentleman who needed to be woken up at 3:30 am each day.  He would then walk into town and work 16-hour shifts at a fast food restaurant. Arriving back at the shelter in the evening, he would have dinner and immediately retire, only to repeat the cycle the next day.  His resilience to the situation touched everyone who met him. 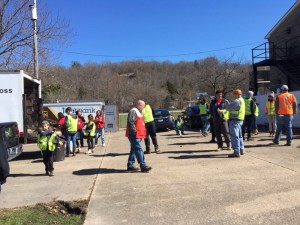 Another resident had been living in a trailer near the water, and as the level of the river rose, he recounted that a number of kittens living below his trailer started poking their heads up through the vents in his floor. He quickly reached down to grab as many as he could and brought them with him to the local animal shelter.  Each day he would leave the shelter and walk back to his neighborhood looking for other kittens to save. In all, he rescued eight kittens during the week Monica worked at the shelter.

After a week, Monica was reassigned to DES (Distribution of Emergency Supplies) across Ohio, Kentucky and Indiana, sometimes driving as much as three and one-half hours to reach affected areas.

Red Cross volunteers like Monica respond to emergencies thousands of times each year. It is only through the generous donations of Americans that we can always be ready to respond whenever an emergency threatens.  Please consider donating today at redcross.org/neo.