Imagine seeing terrified men, women and children crowded on tiny wooden boats and rubber dinghies being rescued from the dangerous, choppy waters of the Mediterranean Sea. 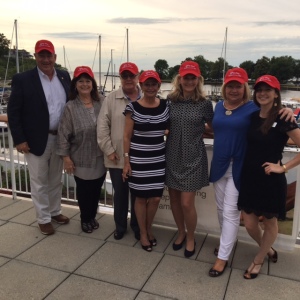 This was the scene that Jenelle Eli watched over and over as she spent nearly a month aboard the Red Cross ship, Responder, which patrolled the central Mediterranean route between North Africa and Italy. She is the Director of International Communications for the American Red Cross National Headquarters in Washington, D.C., having specifically traveled to Ohio to share her experiences with Northeast Ohio Red Cross Tiffany Circle members and staff at an event hosted by Donna Rae Smith at the Cleveland Yachting Club in Rocky River on July 7.

Jenelle travels around the world to places like Haiti, Nepal, and the Philippines to observe the global humanitarian and international disaster response work of the Red Cross. She shares her experiences and photos with the news media and through presentations to raise awareness about how Red Cross donations and volunteers are making a huge impact. Years after earthquakes and typhoons have devastated countries, Red Cross assistance continues as communities recover with new irrigation systems, homes and schools.

In sharing with a captivated audience at the Rocky River event, Jenelle explained how last year, the Italian Red Cross and International Federation of Red Cross and Red Crescent Societies (IFRC) launched a joint life-saving mission with Migrant Offshore Aid Station (MOAS) to patrol and conduct rescue missions along the Central Mediterranean route between North Africa and Italy—where most of the 5,000+ drownings in 2016 occurred. The Red Cross helped save the lives of refugees fleeing their countries from war and poverty.

“They are going on boats without water, food or life jackets. The Mediterranean Sea is super dangerous. After they are rescued, the Red Cross provided them with medical care, food and water until they go to Europe where many apply for asylum.’’

When Jenelle asked refugees why they risked their lives going on a raft in the Mediterranean Sea, a father responded that his daughter was so smart that he wanted a better life for her. A woman who cried for hours told Jenelle that she had tears of joy because she had escaped after being kidnapped by a human trafficker and the Red Cross saved her life from the sea.

The Red Cross works in partnership with Red Cross and Red Crescent teams in other countries and deploys volunteers to help upon request. The Red Cross has a roster of about 60 volunteers from all over the country who serve on an international disaster team restoring information technology – among other relief activities – after disasters so people can communicate. David Schindler and John Wright, from right here in Northeast Ohio, are part of that team!

Jenelle was introduced to the crowd at the Cleveland Yachting Club by Donna Rae Smith, Vice Chair of the Northeast Ohio Tiffany Circle. Donna Rae and Tiffany Circle Chair, Laurie Laidlaw Deacon, shared with guests the power of the Tiffany Circle network of women across the United States, who want to change lives, save lives and strengthen communities through a focused investment of time, talent and treasure in the Red Cross.

“We are informed and active decision makers who are network builders, ambassadors, community volunteers, and mothers who greatly influence family and friends – all working to advance the Red Cross mission to help those in need.” – Laurie Laidlaw Deacon, Tiffany Circle Chair 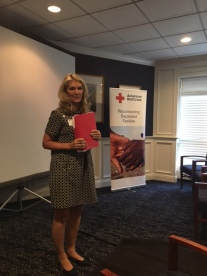 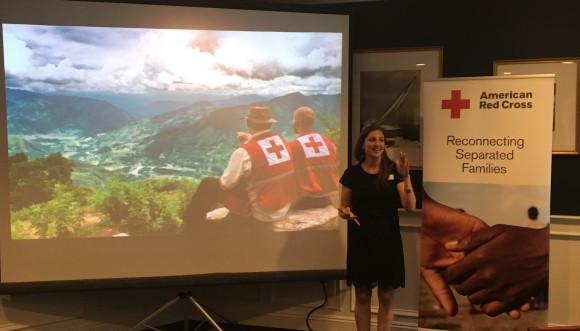 Jenelle also shared the impact of the Red Cross Measles initiative to help save lives.

The Red Cross can continue our efforts to vaccinate the world’s at-risk children against measles – with the goal of ridding the world of this deadly disease.

Measles vaccinations cost only about $1 each – making them an incredibly effective way to improve the health and safety of children around the globe.

To learn more about joining the dynamic women leaders of the Tiffany Circle, contact Donna Gracon at donna.gracon@redcross.org.

For more photos from her deployment at sea, search What I Heard in the Middle of the Mediterranean in the Middle of the Night. Learn more about how the Red Cross helps people around the world by reading Jenelle’s contributions to the Red Cross website: http://www.redcross.org/news-events/news?tag=International, or by contacting Jessica Tischler, Director of Services to the Armed Forces and International Services for the Northeast Ohio Region, at jessica.tischler@redcross.org.