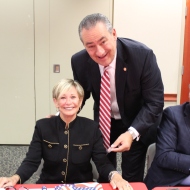 Laurie Laidlaw, Donna Rae Smith and Lorraine Frankino-Dodero were recognized as Red Cross Visionaries. Lorraine was also honored as Philanthropist of the Year, for the generous gift her family foundation recently made to help us purchase a new Emergency Response Vehicle. 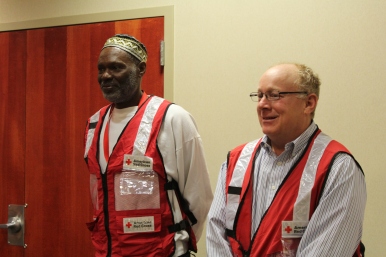 CEO Mike Parks recounted the response to a recent fire in Cleveland, which affected a family of 12, and introduced Gary Grano and Talib Zayed, the two Red Cross volunteers who provided assistance to the family.

The meeting ended with a call to action: to help the Red Cross install 100,000 smoke alarms in September and October, during the Sound the Alarm. Save a Life initiative. Everyone is invited to join us, by volunteering to Sound the Alarm, when we will install smoke alarms in the homes of residents in Cleveland and Akron.  Or by providing financial support at redcross.org.