We at the American Red Cross are recognizing the country’s everyday heroes during Red Cross Month.

And the iconic Terminal Tower in downtown Cleveland was bathed in red light to mark the start of Red Cross month on March 1st. 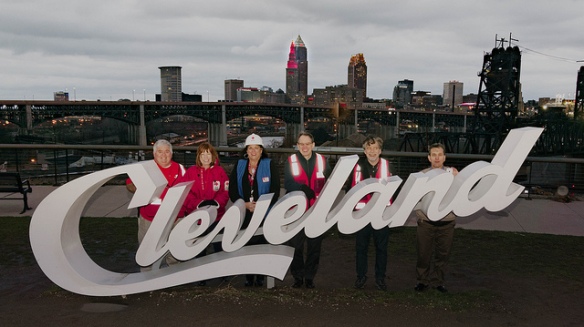 Volunteers and staff members in Tremont, with the Terminal Tower in the background.  The building was lit in red to recognize March as Red Cross Month.    Photo credit: Cal Pusateri/American Red Cross Volunteer

The Red Cross depends on local heroes to fulfill its mission. Every eight minutes, Red Cross disaster workers respond to a community disaster, providing shelter, food, emotional support and other necessities to those affected. We provide 24-hour support to members of the military, veterans and their families at home and around the world. Nearly 14,000 donations of blood must be collected every day to meet patient needs. We train millions of people in first aid, water safety and other lifesaving skills. And we support the vaccination of children around the globe against measles and rubella.

In fiscal year 2016, the Northeast Ohio Region responded to 967 local emergencies, assisted 1,641 members of the military and their families and trained 64,598 people in lifesaving skills. And people from this area donated 144,089 units of blood.

“It’s easy to become a Red Cross community hero,” said Parks. “Be ready for an emergency by creating a preparedness plan for your home. Test your smoke alarms and tell your neighbors to do the same. Or sign up to be a Red Cross volunteer or make a financial donation.”

More information about how people can support the organization is available on redcross.org/neo. The Red Cross is not a government agency and relies on donations of time, money and blood to do its work. An average of 91 cents of every dollar the Red Cross spends is invested in humanitarian services and programs.