In downtown Cleveland, classic rock fills a studio in the Halle Building. Midway through a conversation, Walter Garrett’s eyes light up and he rapidly presses keys and pulls down sliders on a variety of keyboards and mixers in front of him. With a grin on his face, his voice fills the room as he takes the first of many callers who will phone-in during the night. 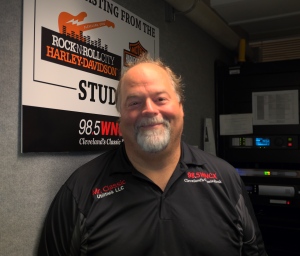 Walter is “Mr. Classic,” the host of the Saturday evening radio show Saturday Night Live House Party for over twenty-five years. A native Clevelander, he now lives right next to the Lorain County office of the American Red Cross in Elyria.

Each day he passed the Red Cross and thought about how he should be doing something there – volunteering or donating blood.

Then, three years ago, Walter underwent a major surgery.

“I wasn’t feeling well, so I went to the ER. It turns out I was having a heart attack.”

Walter needed six pints of blood during his surgery. And due to the efforts of the Red Cross and its volunteers, Walter got it.

He thought about his daily commute and decided that it was finally time to give back to the organization that had helped him in his time of need. He walked into the Red Cross office and asked about volunteering. Now Walter can be found at Red Cross events recruiting new volunteers.

If you have an interest in volunteering for the Red Cross,  log onto redcross.org/neo, and click on the volunteer tab.