Allison Uplinger teased Baylie White as the two graduates of Shelby High School walked through the hallways of their alma mater on Thursday, January 5th.  Baylie had just received the American Red Cross Certificate of Merit, the highest award offered by the Red Cross (so high, in fact, that it is even signed by President Obama) for a lifesaving act. 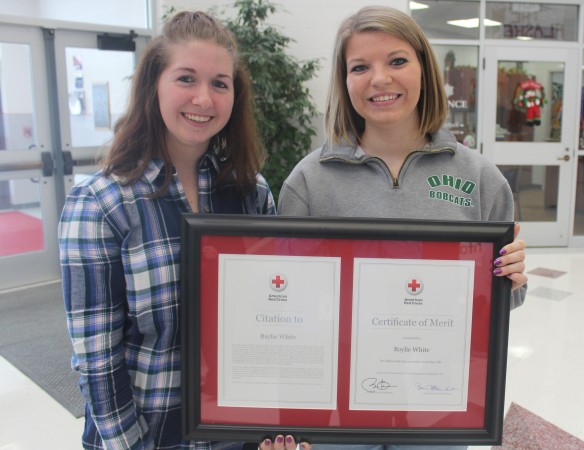 Last spring, while Baylie and Allison were finishing their senior year, Allison began to choke in the cafeteria.  Baylie, who has received Red Cross First Aid training as a certified lifeguard, knew immediately what was happening, and what to do.  After several sharp blows to Allison’s back, the food was dislodged and Allison was able to breathe again.

“I have been lifeguarding for several years, and so I always renew my first aid certification,” Baylie said after receving the framed certificate on the stage of the Shelby High School Performing Arts Center.  The award was given by Lara Kiefer, Executive Director of the Lake Erie/Heartland Chapter, and board member Chris Hiner, the President of Richland Bank.

Allison, who has not yet received Red Cross First Aid training, said it’s on her to-do list.  “Since I plan to be a teacher, I know how important it is to be able to help a choking child.”

The Red Cross offers training in First Aid/CPR/AED, Lifeguarding, even babysitting.  Some classes can be taken online.  You can search for the class most convenient for you here.