With a crowd of one million people or more expected in Philadelphia in late September for the visit of Pope Francis, the American Red Cross deployed a number of volunteers to support humanitarian needs.

Three of those volunteers are from the Northeast Ohio Region.

Kelly Weisenburger, Trish Wilson and Vincetta Tsouris are veterans of out-of town assignments.  Kelly, a nurse at Fisher-Titus Medical Center in Norwalk, has experience responding to hurricanes on the east coast and wildfires in California.  Trish, a nurse at the Ohio Veteran’s Home in Sandusky, has been deployed to Texas and Florida to provide hurricane relief, and helped residents of nearby Findlay when the Blanchard River flooded. And Vincetta’s first assignment was in response to Hurricane Sandy in 2012.  The Steubenville resident served in the Air Force Reserve for 37 years, and is currently a nurse at Weirton Medical Center in West Virginia.

They arrived in Philadelphia on Friday, September 25, and were immediately dispatched to Pennsylvania Health Department Facilities that were set up as Medical Readiness Centers.   While the Red Cross volunteers were prepared to treat a large number of people in the event of a disaster, they say there was just a handful of people who needed only minor medical attention. A few people were reunified with loved ones after being separated in the massive crowd, thanks to the efforts of Red Cross volunteers.  And many homeless people who were displaced by the crowds were given food and water. 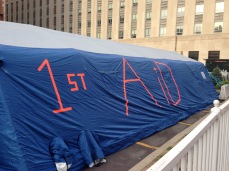 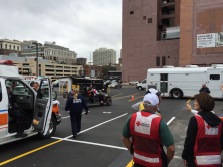 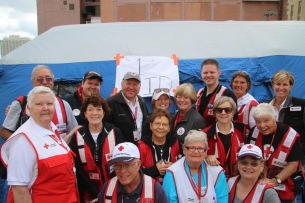 “Nothing really happened,” according to Kelly.  “And that was the perfect part of it.” As a long-time Red Cross volunteer, Kelly is aware of the burden her travels have placed on her family over the years.  But she says she is willing to serve, and her service has apparently rubbed off on her daughter, an optometry student at The Ohio State University, who has become a medical missionary.

Kelly, Trish and Vincetta never got closer than a couple of blocks from the Pope, but they were able to see coverage of the Pope’s movements in Philadelphia on one of the giant screens that were set up throughout the city.  As Vincetta put it, “If it wasn’t for my volunteering with the Red Cross, I never would have gotten anywhere near the Pope.”

The volunteers returned to Northeast Ohio on Monday, September 28th, tired but happy to be of service, and awaiting word on their next assignments.

If you are interested in volunteering, visit www.redcross.org/neo and click on “Volunteer” on the left side of the screen. You will then be prompted to begin the application process.

There’s no guarantee of being assigned to another Papal visit anytime soon.  But you WILL have the chance to help others.