Hurricane Dorian made landfall Sunday afternoon in the Bahamas as a Category 5 storm leaving behind catastrophic damage—from destroyed homes to contaminated water sources. While a complete picture of the damage isn’t available yet, it’s clear the storm is dealing a devastating blow to families on the islands.

In the U.S., the American Red Cross is preparing to help tens of thousands of people in the path of Hurricane Dorian as the extremely dangerous storm tracks towards the southeast coast. While the exact path of Dorian is still uncertain, millions of people live in areas that could be impacted by wind, rain, flooding and a high storm surge, even if the storm doesn’t make direct landfall on the coast.

The Red Cross is coordinating with community partners and emergency responders to prepare evacuation centers as planning estimates indicate as many as 60,000 people in Florida, Georgia, South Carolina and North Carolina may need help. Sunday night, some 2,600 people sought refuge in 60 Red Cross and community evacuation shelters in Florida. We are mobilizing over 1,600 trained volunteers from all over the country, including 14 from Northeast Ohio. 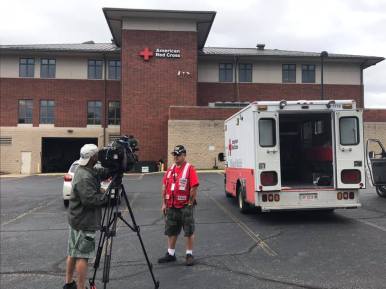 Two emergency response vehicles from the region are among the 110 vehicles being deployed, and 99 tractor-trailer loads full of relief supplies, including cots, blankets and 63,000 ready-to-eat meals are on the way.

While the Red Cross does not typically collect and distribute blood in Florida, we have sent approximately 350 blood products to local blood centers there to ensure patients in need continue to have access to lifesaving blood. The Red Cross has also pre-positioned additional blood products and stocked many of our hospitals to capacity in areas of the Southeast likely to be impacted by the storm early next week.