The longest-running shelter operation in Northeast Ohio in recent memory has ended.

For 11 nights, residents of the Loganberry Ridge Apartments in Richmond Heights spent 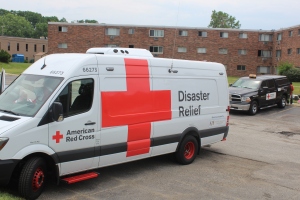 the overnights away from their homes, with some of their neighbors and American Red Cross workers as they waited for their homes to be deemed safe enough to reoccupy.  A fire on July 20, 2018 forced them from their apartments, and repairs kept them away until July 31.

During that time, more than 50 Red Cross volunteers staffed the shelter, 24 hours a day.  The shelter operation began at Richmond Heights High School, where officials were able to move quickly to help accommodate nine residents the first night.  Due to previously scheduled school activities, the shelter location moved to the Christian Assembly Church on nearby Chardon Road, where an average of seven residents took shelter for the next nine nights.

“We operated a shelter for seven days in 2006, when the Grand River flooded in Painesville,” said Debbie Chitester, who has worked for the Red Cross in Northeast Ohio for more than 25 years.  She served as Director of Operations for the Richmond Heights shelter.  “We made sure the residents were safe, and tried to give them a home away from home.”

“Every one of my needs have been met,” said Tracy Foster, one of the Richmond Heights residents who stayed in the shelter. “I’ve had plenty of water, plenty of sandwiches, lunch, breakfast and dinner.”  Tracy was featured in a video on day three of the shelter operation.

Almost 1,000 meals and snacks were served during the 11-night shelter operation.  The cost of food and water, logistics, technology, and immediate financial assistance the Red Cross committed to giving residents affected by the fire totaled nearly $11,000.  The funds for assisting victims of disasters are only available because of the generosity of donors, and the power of volunteers, who mobilize every time disaster strikes in Northeast Ohio and across the country.  You can donate to the Red Cross or volunteer to help your neighbors during their darkest hours by visiting redcross.org/neo.