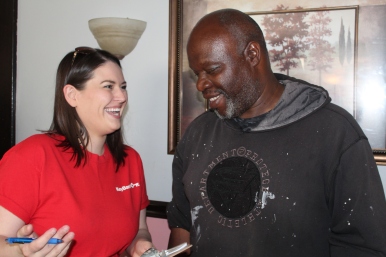 “It’s important to give back.” David Percy, an employee at KeyBank was standing on the porch of a house in Cleveland’s Glenville neighborhood when he explained why he takes part every year in KeyBank’s Neighbors Make the Difference Day. More than 100 KeyBank workers helped residents with landscaping, painting projects, and other home and yard maintenance on Wednesday, May 23. It was the 28th year for KeyBank’s urban beautification effort.

“This is huge,” said E. 111th Street resident Marion Rolling, after KeyBank workers helped install three smoke alarms in his home. “I don’t know if the alarms were even working.” 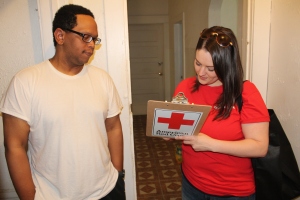 When he was informed that the batteries had been removed from his old alarms, he said, “Well I guess they weren’t!”

The Red Cross performs home safety checks and installs free smoke alarms in homes where they are needed throughout Northeast Ohio. Visit soundthealarm.org/neo to request an alarm.

East Cleveland KeyBank Branch Manager Caitlyn Webster was especially concerned about the homes she entered where children lived.  The mother of two said, “It’s scary to walk into a home with little kids and no smoke alarms.”

“It shows good corporate citizenship,” said Robert Neumann, a Payments Advisor at KeyBank. He said this was the sixth year he has participated in Neighbors Make the Difference Day. “It makes you proud of where you work.”

You need not wait for a special day to volunteer.  The need for qualified volunteers at the Red Cross is constant.  Visit redcross.org/neo to learn more.

You can see more photos from Neighbors Make the Difference Day here.