Annual Toy Giveaway Made Possible by Employees at TravelCenters of America

“Jade is my favorite one!” It took a while before eight-year old Jamie Sullivan found just 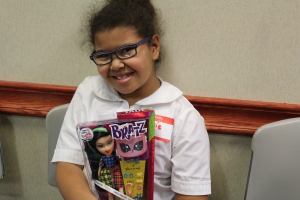 the right Bratz doll to take home during the annual holiday toy giveaway on Wednesday, December 20, 2017.

Right now, home is with her grandmother Lori.  Jamie, her little brother Samuel, and her mother Angela Jordan lost their home to fire just a week before, on December 15th.

86 children received toys collected during a Christmas Toy Drive by employees of TravelCenters of America. It’s the 19th year of the partnership between TCA and the Red Cross.

“We’re happy to help children who have lost so much,” said Tom Liutkus, Senior Vice President for Marketing and Public Relations at TravelCenters of America.  “The Red Cross does such great work, it just makes sense to have them distribute the toys every year.”

“We have plenty of gifts to give to these kids who had a lot taken from them this year,” said Mike Parks, Regional CEO of the Red Cross of Northeast Ohio. ” This is a great opportunity to give back to them, especially at this special time of year.”

“To see everything that you had just gone, it was total devastation,” said Edna Bailey, whose home burned down in September. “I had no idea what to do, where I was going, or anything. The Red Cross came in with hugs, with encouragement, and kind of guiding me. For weeks I received phone calls with follow-up messages.  I’m so thankful.

As of mid-December, our disaster workers responded to 940 incidents, the vast majority of them home fires, in 2017.  The fires disrupted the lives of nearly 1,600 children and more than 2,500 adults in the 22 counties of Northeast Ohio.  They received immediate financial assistance totaling more than $750,000, thanks to the generosity of donors.  If you’d like to help future victims of disasters like home fires, please make a tax-deductible donation here, or call 1-800-RED CROSS.

For more photos from this year’s Holiday Toy Giveaway, visit our Flickr photo album. Media coverage of our annual toy giveaway included a photo gallery from Plain Dealer photographer Lisa DeJong, a video on Cleveland.com, and a story on Cleveland 19 WOIO.