Stay close to them and to the mission!

Editor’s note: As of October 19, 2017, the Red Cross, along with community and government partners, has provided 1.3 million overnight stays in emergency shelters, served more than 6.7 million meals and snacks, and distributed more than 3.6 million emergency relief items to people in need, following hurricanes Harvey, Irma and Maria. More than 16,000 trained Red Cross disaster workers, 91% of them volunteers, have been mobilized to support hurricane relief efforts.  Among those workers is Jorge Martinez, who wrote the following upon returning from a three-week assignment in Puerto Rico.

The Red Cross prevents and alleviates human suffering in the face of emergencies by mobilizing the power of volunteers and the generosity of donors.  We’ve all heard this before and certainly embrace it.   We wouldn’t be part of this great organization otherwise.  But to see our mission statement in action is special.  I was fortunate enough to be part of the relief operation in Puerto Rico; I saw human suffering alleviated through the compassionate and selfless service of our dedicated and humble volunteers.

Puerto Rico is home to nearly 3.5 million American citizens spread over an island that is roughly 35 miles by 100 miles of challenging, mountainous terrain.  Ravaged by a category 4 hurricane — just 2 MPH shy of a cat 5 — the devastation was immense.  There was no part of the island that was not affected.  What you’ve been seeing on the news is accurate and maybe even understated.  But the island residents have come together with a sense of community that I’ve only experienced one other time – in the aftermath of 9/11.

So there we were in San Juan.  We had two carloads of volunteers that were trailing a supply box truck with a local driver.  We were en route to a remote location in the central mountains of the island with no specific knowledge of how to get there.  On our way out of the city, a police officer who had just finished his 12 hour shift came alongside us and agreed to escort us to the site in what turned out to be a 2 hour trek.  Even he got lost, but he got us there.

Once on site, we met with local officials and determined the best place to help those most in need.  We got to our agreed upon distribution site and while we off-loaded the supplies and set up the operation, the local officials went around the neighborhood spreading the word.  Soon we had a line of hundreds of families that were in need of basic supplies like water, food and tarps.

I met countless wonderful volunteers during my trip and became close with a few of them.  One of them was Brad; he was from Kalamazoo, MI and we were on this trip together.  Near the end of this operation, both he and I were going house to house, delivering supplies to those who could not make it to the pick-up site.  We came across a wonderful lady who had already picked up her supplies.  However, her next door neighbor’s house had been destroyed.  It was a humble place before the storm; now, only a small room had any semblance of a roof still attached.  She had taken her elderly neighbor into her own small home but wanted to get some tarps to cover the few remaining savable items that her neighbor had stored in that small room. 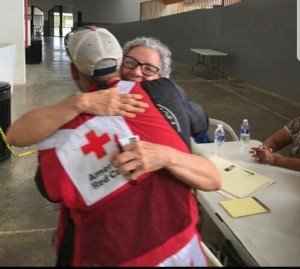 We came back with several tarps for her and gave her a hug.  By the way, at this point a downpour had started.  Mid-hug, she broke down and started to cry.  Coincidentally, Brad and I both had something in our eyes that caused us to tear up as well.  She thanked us profusely while hoping that God bless all of us.  The truth is we were blessed by just being in her presence.  And I was doubly blessed by being in the presence of Brad and the many other volunteers like him.  And no, this was not an isolated incident.

When I first took this job, my predecessor told me to stay close to the mission.  She was mostly right.  Stay close to the mission and to the volunteers!  I want to personally thank the volunteers I had the pleasure to work with in Puerto Rico and the nearly 1,500 volunteers of Northeast Ohio who go quietly about their work without much fanfare.  You make a world of difference — THANK YOU!

See more photos from Jorge’s work in Puerto Rico by clicking here for our Flickr album.

Visit our YouTube page for a video of Jorge’s experience.

1 thought on “The Power of Volunteers”