Looking back 100 years at the Summit, Portage & Medina Counties Chapter

(Editor’s Note:  This is the latest in a series of centennial-related stories involving the founding of Red Cross chapters in Northeast Ohio)

April 18, 1917 – The Akron Evening Times ran a story that Kent planned to organize a Red Cross chapter in that community.  A meeting had been held the night before with pastors of Kent churches all in attendance, along with officers of church organizations, lodges and clubs. A follow-up meeting was to take place that week to make sure the people of Kent did their part in the war crisis.

April 20, 1917 – Barberton began work to organize a Red Cross chapter and communicated their desire to do so to the national office in Washington.

By June 1917, Akron had already formed a Red Cross Chapter primarily for men. It was followed by an auxiliary for women on June 30, 1917. Election of officers found Mary Gladwin elected as president of the women’s auxiliary. She had just returned from serving in Serbia the year before. She was also named to the Akron executive committee along with six gentlemen.

At the June 30 meeting, 24 members of Battery B lined up on either side of the church entrance as people arrived. Upon the start of the meeting, they marched into the auditorium and joined in the singing of the Star Spangled Banner.

Wasting no words, Miss Gladwin addressed their first meeting and scolded the Akron citizenry for their lack of patriotism during the recent deployment of troops the prior week as they headed off to Columbus. Her concern centered around the fact that in the “American” residence districts of Akron, there were entire blocks with not one American flag on display.

November 1, 1917 found the formerly organized chapter in Medina to be doing an excellent job with their sewing.  Unfortunately, a German submarine sank a boat filled with Red Cross supplies. When a local Medina member told District Supervisor Mrs. Harrison Ewing that,  “I don’t think I want to knit if that is to be the fate of my work,” Mrs. Ewing would have nothing of it, responding “Don’t think, KNIT.” That appeared to be the end of that conversation, and discussion turned to lack of yarn and the need to prepare Christmas packets.

By the beginning of December, the yarn had been received and was already knitted into sweaters for the troops. 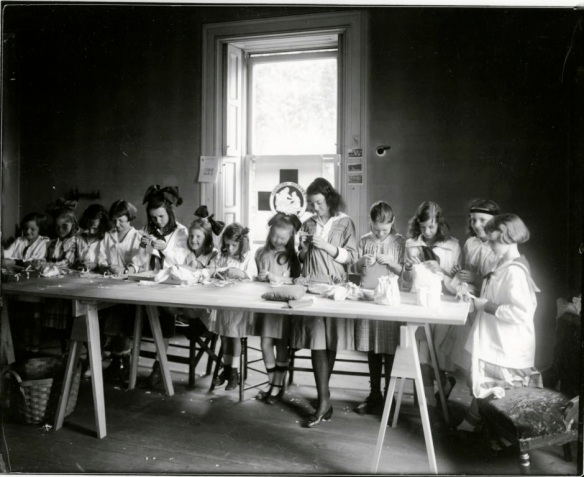 Schools were already starting to organize their own chapters, with Seville and Medina schools ready to go. Children all over were raising money for the Red Cross in support of starving children in Belgium and Poland.  One little girl wrote the following:

I have earned another dollar for the poor children. I have piled up all the pumpkins, and hauled four loads of chips, and pulled some weeds for the pigs and picked up all the scattered beans. I am eight years old today.”

With such dedication from someone so young, how could adults not pitch in?

Today, you can do your part.  Volunteer or donate.  Volunteers can learn more here.

Donating couldn’t be easier. Donate by text, by email, by mail or online. You can even set up a monthly automatic donation.  All five links to giving are here.