When people think of giving blood these days, they often think of the iconic Red Cross bloodmobile and a brief eight to ten-minute stint with Red Cross staff and volunteers. When giving blood, a donor doesn’t usually know who the recipient might be, but what if the person in need of blood was someone who they knew and loved? Perhaps a family member? What if the situation was so grave that the blood had to be transferred directly from her body to his? That’s how Jean Myers first gave blood. 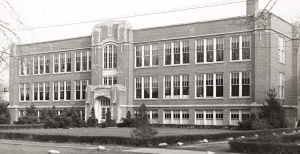 Photo of the New London High School in 1937. http://www.oldohioschools.com

Jean (nee Haynes) was 16-years old when her father, Harold Haynes, was badly injured. Harold had fallen into a gutter while moving a bull on their family farm in Clarksfield, OH. Jean, was a junior at New London High School. Her dad had been hospitalized for some time when she was asked to give blood. She doesn’t remember being scared of the prospect; after all, this was her dad. What Jean remembers is taking the bus into town with her mother and riding the old streetcar down Euclid Avenue to Huron Road Hospital. Jean lay on a hospital bed next to her father, as blood was transferred directly from her body to his. It was May of 1946 and a school day, so believe it or not, she went right back to school afterwards. It was Jean’s first time giving blood, but it wouldn’t be her last. 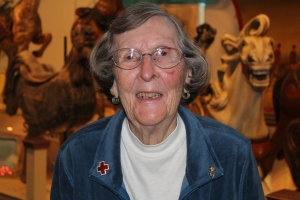 Today, Jean is 87-years-old and has donated almost 16 gallons of blood, not including her first blood donation all those years ago. (Her total gallons donated would have been even more if she had not been rejected a number of times due to low iron levels.) Jean remembers when blood drives first started in New London. They were held at New London High School, which was a collection point for New London and neighboring communities. Volunteers would travel from as far as Greenwich to the high school to give blood. In those days, blood collection drives were held annually so if you were ineligible to give blood during a blood drive, it would be a whole year before you would have another chance to do so. The temporary collection center consisted of four gurneys organized in a square. That meant that donors had to wait their turn. And if their iron levels were low? Well, according to Jean, they would eat more broccoli and get ready for the next blood drive.

The old high school Jean remembers has since been torn down and Red Cross blood drives are now held at the New London Eagles Aerie #2869. Facilities aside, a lot has changed since Jean started giving blood. Donors are now able to give blood once every 56 days instead of once a year, and the process is a far cry from the blood drives at the old high school.

Some things however, have not changed. Jean continues to be in very good health, and plans to continue giving blood. In addition to giving blood, Jean has volunteered with the Red Cross as a receptionist and as a blood drive coordinator.

She describes the Red Cross as “a good group that does wonderful work.” She also adds that, “through the years, the extra blood makes a difference for the small town.” Jean was awarded a 70 year pin at the Red Cross Volunteer Recognition event in the Lake Erie/Heartland Chapter. 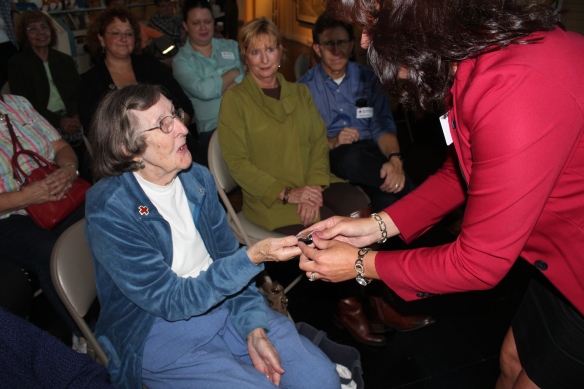 If you would like to volunteer, please visit www.redcross.org/neo and click on Volunteer to get your profile started today!