The NFL has nominated Cleveland Browns quarterback Josh McCown to win Player of the Week honors, following his record-setting performance against the Baltimore Ravens on Sunday, October 11.

If Josh is voted in, the American Red Cross in Northeast Ohio wins as well.

FedEx is donating $2,000 each week to the Red Cross chapter in the communities where the winners play.  The NFL nominates three players each week.  This week, in addition to McCown, New York Giants quarterback Eli Manning and Sam Bradford of the Philadelphia Eagles have also been nominated.

But neither could top Josh’s level of performance. 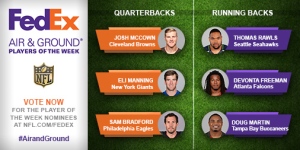 Not only did the Browns quarterback throw for a franchise-record 457 yards in Baltimore to help beat the Ravens 33-30 in overtime, he has become the first quarterback for the Browns to throw for more than 300 yards in three consecutive games, setting another record by throwing for 1,157 yards over that three game stretch.

“He’s playing better than any quarterback in the league right now,” according to CBS Sports analyst Pat Kirwan.

You can vote for Josh McCown to win Player of the Week honors here. Voting closes Thursday afternoon at 3:00 PM. The FedEx program supports the costs of providing immediate and long-term assistance to families affected by a disaster, like a home fire. The promotion also provides families with lifesaving fire prevention and preparedness tools and help in the aftermath of other types of disasters.

Fans will also be able to vote for Josh McCown to win Player of the Year honors at the end of the season.  FedEx will donate $25,000 to the Red Cross chapter in the winning player’s community.

The NFL is also nominating three running backs each week.  Through the FedEx Air and Ground campaign, FedEx will also donate $2,000 dollars to the Red Cross chapters in the communities where those winners play.  Let’s hope Browns running backs Isaiah Crowell and Duke Johnson break  through for a big week against the Broncos this Sunday.